The Cellist of Sarajevo by Steven Galloway | Teen Ink

The Cellist of Sarajevo by Steven Galloway

Set with the backdrop of a raging war, the historical novel, The Cellist of Sarajevo, captures the gripping stories of three different people—Arrow, Kenan, and Dragan. This was the Bosnian War, which extended from 1992 to 1995. It affected many lives in the siege of Sarajevo, the city in which the novel is set. The author, Steven Galloway, skillfully portrays this time of war through his three protagonists’ lives.

A fourth character, called the Cellist, plays an important role in the novel. The other three characters’ stories intertwine with the Cellist as the plot progresses. The Cellist looks for hope in music. A special piece of music, the “Albinoni Adagio”, “gives him [this] hope”. He finds the story of this composition’s discovery encouraging. A section of the musical piece was found by an Italian musicologist in 1945 and then, because the Italian believed it to be written by a “seventeenth-century… composer Tomaso Albinoni”, he built his own musical piece upon it. The Cellist draws hope from the fact “that something could be almost erased from existence in the landscape of a ruined city, and then rebuilt until it is new and worthwhile”.

Although the Cellist is able to keep on going because of music, the other three main characters find it hard to maintain hope.  Arrow, a young woman in her early twenties, is the most bitter of all the protagonists. She was on her university target-shooting team before the war started and is naturally skillful at shooting. Because of this, she is drafted as a defending sniper in Sarajevo. She cannot accept the fact, though, that she is killing people just as her enemies are. Consequently, she puts on a persona, using the name Arrow, rather than her real name. In this way, she hopes that once the war ends—if it ends—she will be able to put this war behind her and begin her old life again.

In the same way, Dragan, an older man, cannot deal with his conflicting emotions about the war. Because of the harsh conditions the war has on him and everybody else in the city, “more and more it seems like there has never been anything here but… [the enemy] with guns and bombs”. Even though he recognizes that Sarajevo has changed, he finds it hard to completely face the war’s reality. Therefore, he dwells on the past and pretends that his city has not changed. Dragan slowly changes, though, as an encounter with an old friend in the ruined city ‘wakes’ him up.

Similarly, Kenan “wishes…that the world [Sarajevo under siege] he lives in, a world he never wanted and had no part in creating…[,] didn’t exist”. Unlike any of the other main characters, Kenan is responsible for a wife and children. Because of this, he tries to hide the terror in his heart from them. Yet Kenan feels these emotions overwhelm him when he is alone, and he needs strength to survive through this war’s “madness”. His journey to find hope is shown through his journey to collect water from a distant brewery.

Steven Galloway excellently depicts Kenan, Dragan, and Arrow’s struggles, and he makes his readers care for each of the main characters. One way he does this is by writing in present tense throughout the whole novel, which makes his writing come alive. Because of this, The Cellist of Sarajevo draws in readers who would be disinclined to read a historically based novel. Additionally, literary devices are utilized in order to make the novel engaging.

One of them is shift in narration, which involves constantly switching the point of view between each of the main characters. Therefore, rather than focusing on one person, readers can become drawn into three people’s hardships. In this way, different perspectives of the war are offered, showing that ranges of people are affected by war.

Another literary device the novel uses is to skip the exposition and start the novel in the middle of the action so that its readers do not lose interest. This device is known as in media res. In media res allows readers to enjoy the rising action while also learning about the main characters’ pre-war lives. Galloway utilizes this when he starts the novel off with, “it screamed downward, splitting air and sky without effort. A target expanded in size, brought into focus by time and velocity. There was a moment before impact that was the last instant of things as they were. Then the visible world exploded”. After these sentences, Galloway begins the exposition, and readers are left wondering why he included this paragraph. Thus, it adds suspense and creates interest so that readers continue reading through what they might think is ‘boring’ in order to discover what happens later in the novel.

Galloway uses literary devices effectively, and through this, readers are drawn into caring for the main characters. However, certain aspects of his style were unnecessary. Sometimes Galloway’s style and overuse of polysyndeton, asyndeton, and parallel sentences were confusing. An example is, “then it [the streetcar] formed a loop, west along the river, past the Parliament Building, the Sarajevo Canton building, the post office, the theatre, the university, and then, at the old town hall, where the library was housed, curved up and around, back past the Markale marketplace and Veliki park until it reunited with the main line”. This sentence is lengthy; therefore, it is difficult to understand. Thus, in this case, specific details do not add to the readability of the sentence.

Another negative factor in his writing was his usage of temporal distortion. This means that every main character has a different timeline compared to the other main characters. For instance, a day in one of the characters’ lives may be a week in another’s. Even though this allows Galloway to provide more detail for one character than for another, it makes it hard to follow each protagonist’s story completely. This is because it is difficult to remember whether the character’s story stretches over a single day or over a whole week. Just as the literary device is confusing, the usage of it lowers the novel’s readability. Other than these issues, there is little to complain about regarding Galloway’s writing.

Galloway is a tremendous author, and The Cellist of Sarajevo is a unique, thought-provoking novel. It causes people to think deeply about the rare gift of humanity and what being human truly means to society. 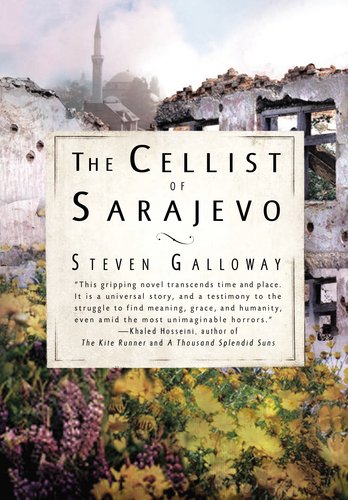