Burned (House of Night, #7) by P.C. Cast and Kristin Cast

Zoey Redbird is no ordinary vampire. She is in fact she is the youngest High Priestess in House of Night history that has ever existed in their history. To make her even more unique she has the power of all five elements, and is a decadent of Aya. Aya was the young maiden made from the earth to trap Kalona by seducing him to follow her underground. The last book ended off with Kalona killing Heath in front of Zoey. They next thing Zoey knew was that she was with Heath in this type of park. As the saga continues we learn something about High Priestess that will shatter your mind.

Accordance to legend and the handbook when a High Priestess has a trauma experience happen to her (like watching your human boyfriend get murder in front of you) your soul can shatter. This is not necessarily a death sentence, but as close as one can get. The High Priestess is sent over to the other world when her soul shattered, also called their goddess’s realm. It is the High Priestess job to accept the pieces of her soul back, and find her way back to her body. The problem is generally the High Priestess do not want to be put back together again. And after watching Heath die, Zoey does not blame them.  How can she go back to the land of living if Heath is not there anymore? How can she leave him dead alone in the other-world while she goes back on with her life? Zoey has to choose between getting her soul back together and fighting darkness, or staying in the other world with Heath for eternity.

“It’s my fault” is the only thing Stark can think. And it in a way, it is true. He was Zoey’s warrior, and left her during that moment because of his jealousy. Him leaving was what got Heath killed and Zoey shattered. Now it is up to Stark to save Zoey. But how is him killing himself a way to bring Zoey back to the living? Stark and the nerd herd as well as Aphrodite turn to the books on how can warriors save their shattered High Priestesses without killing themselves. Helping them out an ocean away is no other than Zoey’s best friend Stevie Rae. Yet she has her own problems to deal with. First and finally she has to deal with the bad red vampires as they almost killed her in the previous book. Then there is Rephaim, whom everyone hates and yet she is slowly falling in love with him.  Stevie Rae will do anything for Zoey, even if that means giving up her most sought after secrets.

P.C. Cast and Kristin Cast this is the longest series in history. Honestly what is this? The Princess Diaries? How many books do you need? As book seven of twelve I pray for a change. Sad to say it but I was so glad when Heath died. Not for the fact of how much it killed Zoey or what going to happen to his parents, but for the simple unpredictable joy of having something new happens. I was beginning to believe that they would not kill off any of our main group through the twelve books. It was finally book seven (well six) that the Cast family sucked it up and killed off one of the main characters that’s been with us since book one.  Now Zoey is down to the one boyfriend/warrior Stark! Yet now I do not care about them with my new favorite relationship of Stevie Rae and Rephaim. Personally I just want them to make-out and announces their undying love for each other. Which if you are a sick person like me and want to see Stevie Rae sleep with a crater born from rape then it is off to the eight book: Awakened. 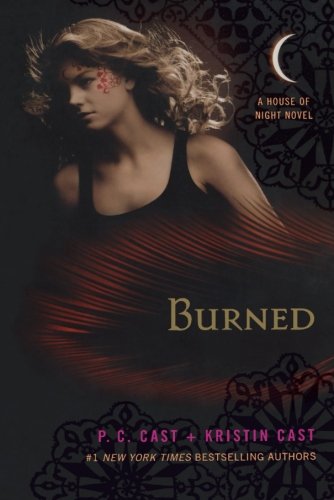