For Cather, life is pretty much about Simon Snow.

Cath, and her twin sister, Wren, have been writing Simon Snow fan fiction for just about as long as they can remember. Simon Snow and Wren is how Cath coped with her mom leaving when they were eight. Simon Snow is a tradition during the holidays. They’ve been to midnight book release parties, seen all the films at least 1,000 times, and 99.99% of Cath’s wardrobe is Simon Snow. But Wren has started to drift away from the fandom during their first year of college. For Cath, Simon Snow is more important than ever before. A geeky introvert, Simon is the only way Cath can deal with this totally new life. Is it time to leave Simon Snow behind?

And when their mom comes back into their life after ten years and Cath meets her roommate’s boyfriend, Levi… well, things just got a lot more complicated.

Source: Gift from my mom <3

It’s really wonderful to stumble across a character you can really relate to, once in a while. For me, Cath was that character. It was so easy to lose myself in her world and her words, and her prose was that beautiful type of simplistic that takes a while to get used to, but then you start to appreciate. A lot.

Cath is so real and flawed: she is socially awkward (like me), her hobby is worrying (like me), she really, really enjoys writing (like me), and she’s studying to become an English major. Only one problem: Cath’s only experience in writing are a few short stories and her very-popular Simon Snow fan fiction, Carry On, Simon, which has tens of thousands of hits a day. Presumably, she’s spent years working up to this, but it does seem, rather… easy. And because I relate to Cath so much, it does pain me to say that there is no plausible reason she should have gotten into an advanced creative writing class, because she’s never written herself.

I also really love books about twins. For some odd reason. I don’t have a twin (or any siblings, for that matter), so it’s interesting to explore the bond between them. With Cath and Wren, I could see the typical represented-in-the-media-but-perhaps-not-always-true-in-real-life depiction of a “more outgoing” or “dominant” type twin (Wren) and a “less outgoing/geeky/nerdy” or “submissive” type twin (Cather). This is really, truly a coming-of-age book. There’s not too much drama, or back-to-back events with tons and tons of cliffhangers. It truthfully and honestly depicts Cath’s everyday life, something which I think isn’t done often enough (or is done, but isn’t done right), and I really did enjoy seeing the ins and outs of her every day.

We get to see Cath’s every day university life, her relations with her father, her internal conflict about her mother, and her external conflict with Wren. Cath’s mother coming back into her life was a really interesting aspect of the book, at least to me. Cath’s reactions were so different from Wren’s, and she reacted so much more calmly than I probably would’ve in that situation. In the end, though, I thought Cath’s mother’s arc was very promising… but fell flat and ended about 3/4 through the novel. I kept expecting her to come back and have something really life-changing happen around her, but in the end, she just sort of faded out. Cath and Wren had one conversation about her closer to the end of the book, and then she disappeared.

There is a love interest, yes. But he is also geeky.

Cath and said Love Interest do not get together until halfway through the book (and it’s not obvious from the beginning who it’s going to be, so I won’t spoil it for you), but when they do, it’s an actual, respectable love story, for once.

So many times in YA fiction have I seen the girls drop everything to fret over their boyfriends and please them… when really, it’s not the girl’s job to do that at all. And Cath portrays that. Quite epically. Carry On, Simon, her fan fiction, MUST be finished before the release date of the eighth Simon book. She doesn’t stop writing fan fiction for her boyfriend. At first, she’s shy to tell him, but he is supportive of her interests, and understands that finishing Carry On is years’ worth of progress for Cath, and that IT MUST BE DONE.

The conclusion to the arcs felt rushed and incomplete.

I loved the middle of this book. But, as I said before, Cath’s mother’s arc didn’t really feel… finished. Sure, at the end, there were about three lines mentioned about her, but nothing more. Another incident happens in Cath’s creative writing class in which a special exception was granted for her. Even though she’s supposed to be working really hard on this “special exception,” and blah, blah, blah, she… doesn’t, really. We get a snippet at the end talking about this, but like with Cath’s mom, it doesn’t really provide the closure I wanted, although some readers liked the ambiguity. Also, it was never mentioned whether Carry On, Simon was finished before the eighth book came out, something which was a major problem and stress factor for Cath. So I had a MAJOR problem with that. Or maybe I just missed it somehow? Anyhow, I feel like if Cath did finish the fic she’d been working on for so long, she should have mentioned it or at least had a bigger reaction that was harder to miss.

Overall, the story was breathtaking in its descriptions of everyday life, but in the end, didn’t provide the closure I felt I needed, although other readers may have felt different. I really did enjoy the bulk of the book, though, and I’d recommend it to anyone who is a fellow fangirl.

Rainbow Rowell is the bestselling author of Fangirl and Eleanor and Park. She has also written numerous books for adults. Fangirl is now Sabrina’s favorite YA Contemporary novel. Notice that she says YA contemporary. She will always be a Harry Potter fangirl at heart. 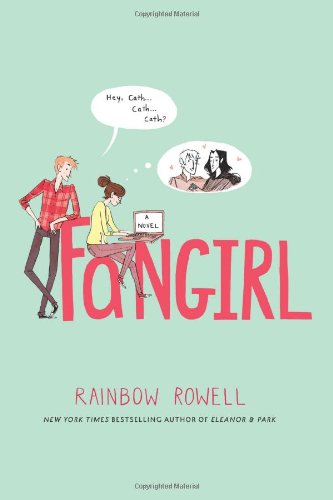 Overall, the story was breathtaking in its descriptions of everyday life, but in the end, didn’t provide the closure I felt I needed, although other readers may have felt different. I really did enjoy the bulk of the book, though, and I’d recommend it to anyone who is a fellow fangirl.