Coraline is a lonely child. With parents who are always too busy to pay any attention to her, in a new home with no friends nearby. Yet with her over active imagination, Coraline explores the new world she is in, with or without her parents’ permission. The house they are now living in is divided into four parts. The actresses on the bottom floor, the crazy old man in the acted, then it is Coraline’s family and the empty flat in the middle. Yet on one rainy day, where Coraline could not go outside and explore, she stayed inside going into the fancy living room. There she found a door. A door that once her mother unblocked it revealed a brick wall that use to go to the empty flat. Soon that door would be the start of Coraline’s grandest adventure.

One faithful night Coraline followed the rats back to the door, which when she opened, was no longer bricked up. On the other side is a mirror image world of her own. Filled with everything she loved and her other Mother and other father who love her and want to spend all their time listing and playing with her. Where the food is good, and there is always things to explore. Yet too good, is also too much, as Coraline loses her parents to this other Mother. Coraline has to invent a game, to not only save her parents and herself, but the other children who did not see through the other Mother’s disguise. Coraline only hope is to outsmart the other Mother, who does not play fair.

Neil Gaiman did an amazing job in this twisted children story. Although it was written for a child, I enjoyed it, even with the simple language used. The pictures drew by Dave McKean were amazing, an excellent surprise for someone who haven’t read a book with pictures in a long time. Coraline hit the big screens as a 2009 children’s animation with Dakota Fanning voicing Coraline. Overall an amazing book, with a very interesting and unique concept. 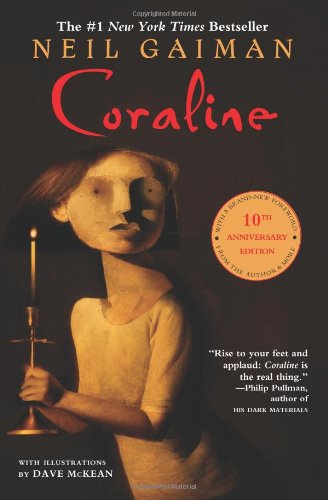 An odd but great children's book.