“Barren, silent, godless”
Three simple worlds hold the gravest of implications for the few characters of The Road by Cormac McCarthy. Its setting is so described, and in this haunting novel, setting rules. A wasted, post-apocalyptic land of bleak gray hues and ravaged life is laid out like a tapestry woven of paragraph after paragraph of succinct and striking prose. McCarthy, using a writing style that grabs one's attention from the first page, constructs the ultimate ode to the world as we do not want to know it.

The book follows the journey of a boy and is father, on the road to a better place. The man and the boy, as they are referred to throughout the novel, walk through a broken world, through “nights dark beyond darkness and days more gray each one than what had gone before.” Page after page McCarthy documents their slow, plodding journey in the sparsest sense. Chapters do not exist, there is no break in the dark tone and cliffhangers do not challenge the reader on. Instead, the simple struggle of the man and the boy forces the reader to continue. One night they sleep under a tree shedding ash, eating the last of their precious rations. The next they struggle onward to shelter in a burned house, finding a cellar full of emaciated men and women wallowing in holocaustic conditions. This struggle continues across the novel, it does not let up, doesn't relinquish its sickening hold on the mind, body and soul of the man and the young boy, in whom the emotional root of this tale lies. Neither does it give the reader chance to catch their breath.

For a lighthearted read, where the facts are laid in out like a data table and a happy ending is never in doubt, go elsewhere. The Road is not for the faint of heart, bloodthirsty cannibals, partaking in unspeakably barbaric actions, roam this gray, dead, wasteland (brought on by “a long shear of light and then a series of low concussions,” harbingers of a nuclear holocaust). For an easy, no-effort needed read, read elsewhere. We never know the exact details of the events which turned the world into a gray slab of rock and ash; geopolitics are never discussed and a war is never explained. Loose threads are left loose; it seems that in such a broken world nothing can ever be wrapped up. Instead, McCarthy focuses on what makes this book truly special, the relationship of a father and a son in the darkest of nightmares.

The man and the boy have a love for each other made almost incomprehensible by much of this modern, coddled, world. Reading of their struggle, I thought of Night, the book written by Elie Wiesel, documenting his father's and his struggle through the holocaust. Wiesel writes of the horrifying forced march between the Auschwitz and Buchenwald concentration camps, at the tail end of WW2, in which hundreds died and his father desperately attempted to continue breathing. The Road is this specific struggle laid out for the entire world. There are no Allies in this story, no friendly troops to liberate the victims from the never-ending hunger and cold. No, on The Road, there is only death and the remnants of it. Both the father and the boy know that without the other they would not only die physically within a few days, but their soul, their burnt souls, struggling desperately to grasp any small bit of hope, would cease to exist. “I'm right here” the man says reassuringly “I know,” replies the boy, and it is these simple exchanges which reveal the true depth of their relationship. With that bond emerges the one ray of hope in this ultimately dark novel.

Entertainment Weekly called The Road “a masterpiece”, and, indeed, it is. Set against the blackest of worlds the short paragraphs documenting the simple hope of a man and his son for a better future stand out as a testament to the power of literature and a profound statement on the nature of humanity. There is no reason not to read this book, no reason to watch a movie or sit on a couch and watch a bad TV show instead. Instead, read this stunning novel. You will find more emotion, more gut-wrenchingly powerful scenes in its short 200 pages than any movie you have ever seen, any book you have ever read. 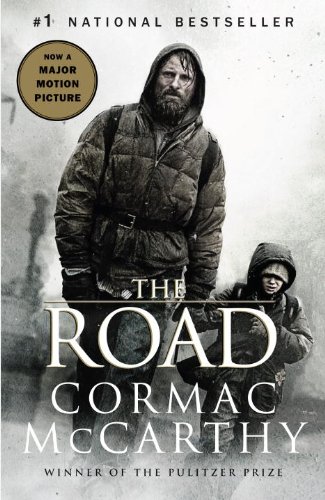 I most sincerely agree.

I read this book and it is one of my favorites.