The Odyssey by Homer (Translated By Robert Fitzgerald) | Teen Ink

The Odyssey by Homer (Translated By Robert Fitzgerald)

Odysseus, the main character in The Odyssey, is portrayed as an epic hero because of his sharp intellect, extraordinary strength, and outstanding courage. However, is Odysseus truly heroic? I do not think so, because Odysseus makes many high-cost decisions that yield few benefits.

In Book IX, when Odysseus and his men journey to the land of the Kyklopês, Odysseus chooses to stay in the Kyklops cave to see if he can meet the Kyklops rather than taking the riches and sailing away: “‘We say/put out again on good salt water!’/Ah, how sound that was! Yet I refused. I wished/to see the caveman, what he had to offer” (IX.245-249). Because of this stupid decision fueled by Odysseus’s thirst for adventure, 4 men were eaten and the rest were mentally scarred. Odysseus blinds the Kyklops and escapes, making Poseidon, father of all Kyklopês and god of the sea, his enemy.

In Book XII, Odysseus travels to an island inhabited by the cows of Helios, the sun god. Kirkê tells Odysseus that they must not eat the cows or else they will suffer terrible punishment. Despite this warning, Odysseus chooses not to tell the men, and they eat the cows anyway. Zeus, god of thunder and lightning, learns of this and sends down punishment from the sky: ‘With crack on crack of thunder, Zeus let fly/a bolt against the ship, a direct hit,/so that she bucked, in reeking fumes of sulphur,/and all the men were flung into the sea.” (XII.527-530). All of Odysseus’s men are stranded in the sea, but Odysseus is rescued and safely taken away by Calypso.

These are just two of the many poor decisions that Odysseus makes in The Odyssey. Odysseus, however, is still celebrated as a glorious hero when he returns to Ithaka, and his friends and family rejoice at his return. But can you really consider yourself a hero if you choose to sacrifice the lives of others for your own well-being? 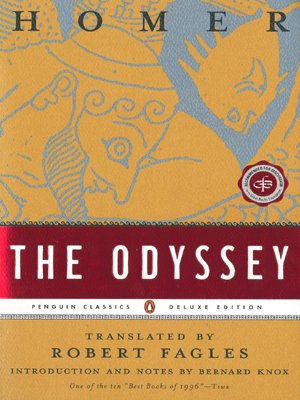 
Buy from Amazon
The author's comments:
This is less of a review and more of an analysis of Odysseus's character traits and if he truly is a hero. But, in a sense, analyzing is a synonym to reviewing. :)
Post a comment
Submit your own