Of Poseidon by Anna Banks

Favorite Quote:
"For I know the plans I have for you declares the Lord. Plans to prosper you and not to harm you. Plans to give you hope and a future." Jeremiah 29:11

What comes to mind when you hear the word, "mermaid"? Red hair and a dainty red tail? Guess again. Enter Galen, hero of Anna Banks' Of Poseidon. He's tall, dark, and muscular with violet colored eyes and his tail is sleek and gray like a shark. Plus, he can morph into human form or blend to look like water at will, just like the rest of his kind. Oh, and by the way, don't even mention the word, "mermaid" or "merman" around him. Galen is a Syrena, thank you very much, a royal of the House of Triton.
Galen is looking for a girl who can supposedly talk to fish. This girl is said to belong to the House of Poseidon, the Syrena kingdom at war withe the House of Triton. This girl could be the key to uniting the two kingdoms.
Suddenly Emma McIntosh runs smack into him and he notices with shock, her violet colored eyes, a clearly Syrena trait. However, something about Emma is off. She has almost white blonde hair, and pale skin. In other words, she's the exact opposite of what a true Syrena looks like.
As time goes on, Galen discovers that Emma indeed holds the key to his kingdom and a whole lot more. Apparently, she also holds the key to his heart.
Mermaids, humor, and romance. What more could you want? Of Poseidon will hold you captivated until the very last page, leaving you breathlessly anticipating the sequel, Of Triton. 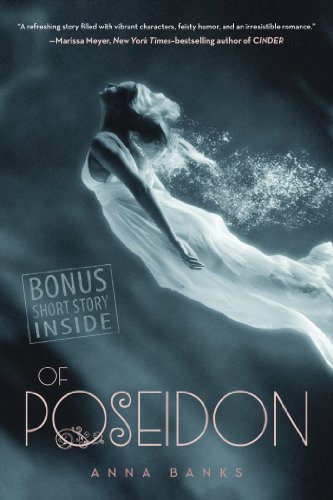