In “Romeo and Juliet” Imagery is used in light and darkness, astronomy, and similes and metaphors to paint a mental picture into the reader's head.
Light and darkness is used in imagery to describe aspects of the play. Some light and dark statements describe night as Romeo's cloak. Romeo says, “Her eyes in heaven would through the airy region stream so bright that birds would sing and think not night,” which shows Juliet makes the night seems as it were day. Romeo says “I have night's cloak to hide me from their eyes,” which shows Romeo is safe from the Capulets that want to kill him. Some light/dark is used to describe Juliet. Romeo says as he watches Juliet, “what light through the window breaks, I is the east, and Juliet is the sun.” Romeo describes Juliet as a “Bright angel, for thou art as glorious to this night.” Light and dark is used for other imagery purposes such as at the balcony scene. Romeo tells Juliet “thou knowest the mask of the night is on my face” at the balcony because he is safe from Juliet's family. Romeo says, “O blessed, blessed! I am afeared, being in night, all this is a dream”
Astronomy is used by characters in “Romeo and Juliet” to create imagery. Some astronomy is used to describe Juliet's beauty Romeo tells Juliet “The brightness of her cheek would shame stars as daylight doth a lamp” Romeo tells Juliet “Two of the fairest stars in all of heaven, having some business, do entreat her eyes to twinkle in their spheres until they return” Some astronomy is used to describe happiness. Capulet says “Behold this night earth-tredding stars that make dark heaven light” at his party referring that the women there are beautiful. Romeo says, “arise fair sun, and kill the envious moon” Some astronomy is used by Romeo to give imagery for his love or lost love. Romeo swears his love to Juliet by saying “Lady, by yonder blessed moon I vow.” After Romeo has lost Rosaline he says, “For my mind misgives some consequence yet hanging in the stars shall bitterly begin its fearful date.”


Similes and metaphors are used as aspects if imagery to portray emotions or actions. Some similes/metaphors are used to describe beauty. When Romeo sees Juliet for the first time he describes by saying, “it seems she hangs upon the cheek of night as a rich jewel in an Ethiop's ear.” The nurse compliments Juliet by saying “What lamb! What ladybird!” Some similes/metaphors are used as humor. Mercutio jokes about Romeo to Benvolio by saying“Thou a pop'rin pear.” Romeo describes his feet by saying “I have a soul of lead” when he doesn't want to dance at the party because he just broke up with Rosaline. Some similes/ Metaphors are used as describing objects or people. The prince says “Ho! You men, you beasts” when he sees the two families fighting each other once again. Romeo tells Juliet “My lips, 2 blushing pilgrims” when he wants to kiss her at the party when he meets her for the first time and “falls in love”.

Imagery is used by Romeo, Juliet, and the other characters through light/dark, metaphor/simile, and astronomy. The imagery can be used in many different ways. 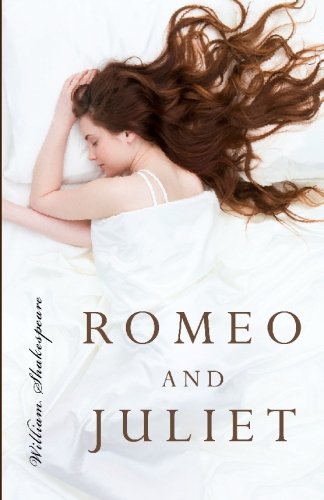