Enders Game is an amazing story about a young boy named Andrew (Ender) Wiggin who is exceptionally brilliant and may be Earth’s last chance to survive the war against aliens known as “Formics.” Formics, known as “buggers” in the book, are aliens that came to colonize earth just decades before, costing us humans tens of thousands of lives. The only thing that saved the entire human race was military commander, Mazer Rackham. Since then, the Formics have remained a constant threat to the human race. The IF?s (International Fleet) solution to this is to recruit a child with enough vigor to destroy the buggers, enough empathy to understand them and enough intelligence to handle situations humans can’t even think of. Does Ender have what it takes?

I personally liked both the movie and the book because there are things I like about each, as well as things I would change. I understand it is hard to make a movie out of such an amazing and vivid story, but there would definitely be some things I would have changed about the movie. There were small things that were changed in the movie but didn’t affect the story; like Major Anderson being a woman, Mazer Rackham having tattoos, Eros actually being a planet, Bonzo being very short and unintimidating in the movie and more. But those weren?t as ruinous as the rest I found very disturbing. Starting with the characters, the thing that bothered me the most was how much they changed Ender; it really affected his character. Firat of all, he was supposed to be six when he got into battle school and nine when he went to command school. This bothered me because what’s more surprising, a nine-year-old boy doing physics? Or a fourteen-year-old boy? His being so young in the book made it obvious how superior he was to the other kids. It also didn’t show how much he had to go through as a young boy; he was not yet twelve when he led the most important military mission in the world. Secondly, they changed Ender’s growth from the beginning of the book to the end, which affected the entire timeline of the story. Sure, it enhanced the urgency of the war, but it didn’t show how Ender changed over time. And the last thing that bothered me was how you couldn’t tell what Ender was thinking. I liked knowing the complex thoughts that went through his mind in the book, but in the movie he just seemed like an average kid who guessed strategies that worked. The last thing that really bothered me about the movie was how Ender looked like he was handling everything just fine. In the book it showed how much the schooling was tearing him apart, how much he was going insane. Peter and Ender’s relationship was changed in the movie as well; they had the fighting to show how mean and hateful Peter was, but they didn’t have Peter’s apology, which made me think of him in a completely different way. There wasn’t as much childish language like “Fart-eater” which changed how young the children in battle school seemed which, in relation to Ender’s age, altered the story’s timeline.

Overall, I think the book was much better because of its detail and originality. The movie was good too, but nothing can beat the book. My advice would be to definitely read the book, I wouldn’t, however, recommend watching the movie. Trehe book is far more descriptive and not as rushed. Even if you don’t like reading, you should really try reading the book because it seems like it would be appealing to all readers and the story it follows is better read than watched. 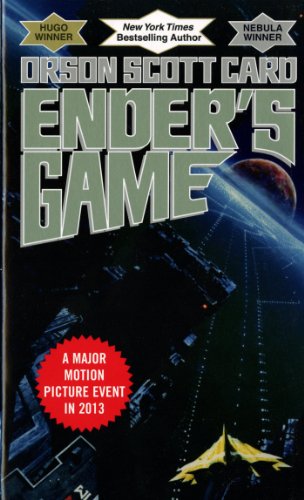 
Buy from Amazon
The author's comments:
As an 8th grade class we read Enders Game and just recently went to watch the movie (also as a class). Here is what I think about the two.
Post a comment
Submit your own