Rating: Three and a Half Stars

From very different worlds, June and Day have no reason to cross paths—until the day June’s brother, Metias, is murdered and Day becomes the prime suspect. Caught in the ultimate game of cat and mouse, Day is in a race for his family’s survival, while June seeks to avenge Metias’s death. But in a shocking turn of events, the two uncover the truth of what has really brought them together, and the sinister lengths their country will go to keep its secrets.

Full of nonstop action, suspense, and romance, this novel is sure to move readers as much as it thrills.

Review: The reason for the half star in my rating is because I couldn’t bring myself to rate it three stars when I thoroughly enjoyed it, but I also couldn’t rate it a full four stars because of the obvious flaws that kept me from flat-out loving it, so I settled for the in between.

The point of views alternated between June and Day throughout the book. This would have been perfectly okay if it weren’t for the fact that the voice was practically interchangeable for both views. I also found that the character emotion was not as deep as it could have been, so I had a hard time feeling for the lead characters. Another major flaw with the book was the lack of surprise for the reader. I could guess what would happen many pages before it did.

I hope I didn’t talk you out of reading this book, because it was a very good story with a gradual romance without the cheesy instant-love stuff. The relationship between June and Day was just an attraction that grew into something more. The post-apocalyptic setting and beautifully-detailed action scenes suck the reader into the story as well.

Like most teens, I think Dystopian novels are always fun to read. Teens have an undeniable rebellious nature that attracts books with a society that makes the reader want to rebel, and when the characters finally do, there is a sense of satisfaction for them.

I don’t like to compare books to other books, but the setting reminded me of the Hunger Games – they both have malicious rulers, a wealthy capital and poor surrounding districts. I think anyone who enjoyed the Hunger Games will enjoy this action-packed read. 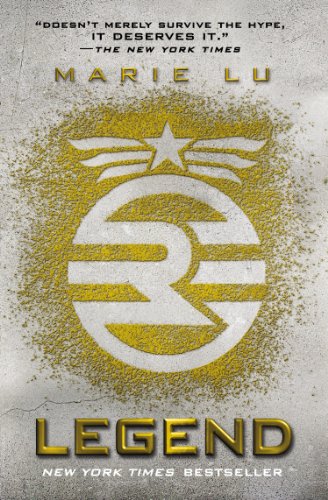 Favorite Quote:
"Yesterday is history, tomorrow is a mystery, but today is a gift; that's why they call it the present"

View profile
Whoa! professionally written! I doubt if i can frame a review like this!