There is much to be enjoyed in American Gods. The uniqueness and originality one expects from a Gaiman novel comes not so much from the plot but the premise and unusual characterization. While the hero’s journey follows a rather predictable path, the outcome of the novel itself does not.

American Gods begins with a man by the name of Shadow returning home at the end of a four-year prison sentence only to find his hold life is dead. After a bit of convincing, he becomes the bodyguard and errand man for a conman going by the name of Mr. Wednsday. No ordinary job, Shadow becomes sucked into a strange underworld of forgotten gods, struggling to get by in a country that isn’t suited to their kind. Even worse, they’ve been supplanted by new gods, representing that which dominates our modern lives such as media or internet.

The origin of the gods, except as a product of human belief is one that is never really explained. The boundary between folk hero, mystical creatures and classical gods such as Loki or Thor is never made clear. A reader can form their own theory about how gods are made or spring into being, or simply sit back, suspend their disbelief and enjoy the ride.

And what a ride it is! Gaiman’s characterization of the gods is original and witty. He devises clever occupations for these washed up superpowers, from slaughterhouse workers and fortune tellers to morticians. As Shadow accompanies Mr. Wednesday on his quest to recruit gods to battle the new divinities, the reader is introduced to a variety oddball characters, vaguely sinister roadside attractions, and fantastic places outside of ordinary reality.

Since Shadow is the protagonist, the mere mortal caught in a battle of gods, we see the world through his eyes. We witness him become a self-sacrificing and courageous hero in a fine example of the monomyth, a theory that every hero’s journey is essentially the same. This isn’t a downside by any means; indeed in a story of larger than life figures it is enjoyable to see an ordinary, somewhat broken man, stand on his own and, yes, save the day.

As a snapshot of America, the novel is a brilliant success. Gaiman freshly and without bias examines the American mindset and proves that the nation is a poor one for gods. Oddly if not detrimentally, he steers clear of Christianity, a religion which seems to have prospered well in US soil. This however is of little contrast. Gaiman lovingly detials roadside museums, a classic American small town, and the highway, all in a way which provides rare insight in just what make sour country tick.

The novel is full of delightful subplots. From Shadow’s dead wife, a disappearance in the charming town of Lakeside, and the stories of immigrants and the gods they brought with them sprinkled throughout, there is much to enjoy. The final payoff of the ending, where the various plot threads are resolved, is so surprising and satisfying it’s nearly flawless.

It’s a thick book which becomes hard to follow and a bit too elaborate is a chapter or too before the climax, but even this becomes worth it in the end. Ultimately American Gods is about many things; belief, heritage, heroism and love. But at its heart it’s a story about just what the title suggests, and despite its fantasy label what is has to say is brilliantly real. 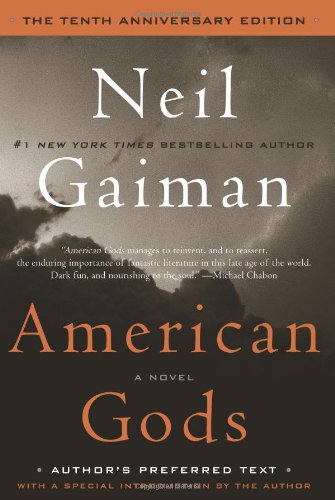