BAM! That first gunshot, in my school cafeteria, a place I thought was safe was shot because of me. This is how Valerie Leftman feels when her boyfriend shot teachers, students, Valerie, and himself. This book isn’t just about violence in teenagers though; it’s about how you can’t let a tragedy ruin your life. Hate List, by Jennifer Brown is a great book that makes you want to read the whole thing at once, with lots of drama and a plot with realistic problems. I would recommend this book for anyone who is around the high school/ middle school age. That’s because it is in the point of view of a junior girl in high school, and about how she and her friends deal with a shooting in their school. I thought this was a very interesting book, because even though it was only in the voice of Valerie, you could really see the other characters perspectives too. For example, in the middle and towards the end, you could really see how Valerie’s little brother and parent’s felt about the whole thing. Those were a few of the reasons why I’d recommend this book. You can’t let a tragedy ruin your life. That is the theme I got from Hate List by Jennifer Brown. I thought that was a very good message to get from a book because it applies to a lot of different things. In this book, a girl gets really depressed and, in my opinion, wasted a year of her life. She spent it moping around and feeling sorry for herself. That is a great example of, even when something terrible happens; you have to get over it. I thought that message was shown very well in the book Hate List. The plot of this book had some realistic issues in it. Valerie Leftman, a junior in high school, gets shot in the leg by her own boyfriend. Her family and what’s left of her friends turn on her because of the Hate List she wrote. It was a notebook filled with names of people she and her boyfriend, Nick, hated. Valerie thought it was one big joke, but Nick took it way too seriously. Most of the people that died that day of the shooting were on the hate list. When you read this book, you'll find out who died, and go into flashbacks of why they were on the list to begin with. All in all, Hate List is a drama filled book that has a plot with realistic issues. What if your boyfriend, who you thought would be with you forever, shot you in the leg? What if you were threatened at gunpoint to stay away from the only friend you have left? In Hate List, You can see how Valerie deals with this when she has nobody to turn to. She didn't want those kids to die. 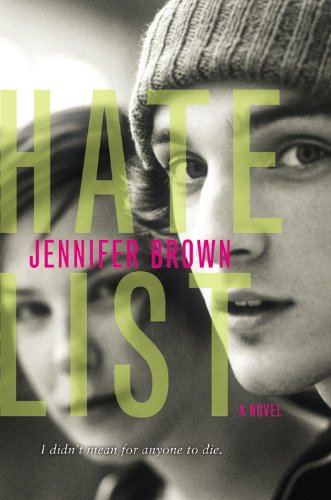