The Thief by Megan Whalen Turner

Eugenides the thief boasts he can steal anything, and that’s true enough. The problem comes with getting away with it—after stealing the King of Sounis’s royal seal, it’s probably not a good idea to brag about it in a random wine shop unless you really want to end up languishing for months in the king’s dungeons, which is exactly what he does. Lucky(-ish) for him, the King’s scholar, the magus, offers him a deal. If he helps the magus steal some unspecified object of great power and importance, then the King will let him go free.

Along with the magus’s two apprentices and a veteran soldier, the group sets off to find this object. This band’s dynamics are interesting, to say the least. The apprentices establish a rivalry, Gen is sarcastic, lazy, and whinier than a three-year-old, the soldier is smarter than he lets on, and everybody plays mind games, especially the magus. Between them they manage some fascinating philosophical discussions. Meanwhile, the rival kingdoms of Eddis and Attolia take great interest in this little expedition, in a “let’s go kill them” sort of way, and Gen is hiding a bigger secret than anyone could guess.

The Thief boasts dynamically human characters, a creative plot set in an unusual fantasy world, and a wickedly brilliant plot twist at the end. It is followed by The Queen of Attolia, The King of Attolia, and A Conspiracy of Kings, which will be almost required after you read this book, even though technically it stands alone. They feature more ingenious plot twists and some of the screwiest, most headache-inducing, perfectly logical three-way political machinations ever. 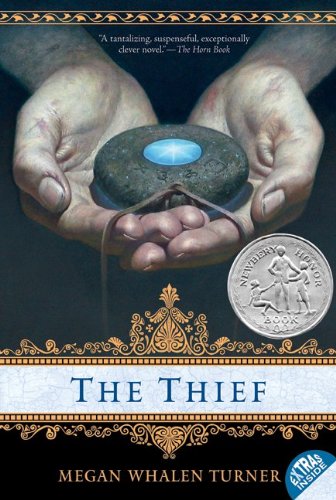