That instantaneous feeling of regret, knowing you made a wrong decision but being incapable of turning back. In the young adult novel Playing Hurt by Holly Schindler, no one knows this feeling better than Chelsea Keyes, a high school basketball player with a supportive family and a charming boyfriend named Clint. However, as soon as the story begins, a devastating hip injury on the basketball court leaves Chelsea being held together by a metal plate. Six months later, as summer begins, Chelsea’s dad hears about a boot camp a couple hours from their home and decides that, because her hip is mostly healed, it would be best for Chelsea to start exercising again. Chelsea really disliked her dad’s idea however once she got there something changed her mind; the guide of the boot camp is named Clint, a caring and likable guy. Over the course of three weeks, Clint and Chelsea grow closer; but as internal conflicts tear themselves apart love brings them back together. In this heartwarming love story, the reader will see the essence of hard decision making and taking chances.
The characters in this novel made the reading experience like no other. Clint and Chelsea have a lot of similar character traits; both are athletic and smart. However, after Chelsea’s hip injury, she becomes angrier over small things and gets upset more easily. On the other hand, Clint’s actions are always well thought out; Clint is a very likable character. One of my favorite quotes from Clint is,” The sun shines down on us like she’s completely oblivious that anything bad could ever happen on the beautiful planet she lights every single morning.”(29). On another topic, Gabe, Chelsea’s boyfriend, although he does care a lot about Chelsea, their relationship seems slightly frivolous. In my opinion, the author meant for their relationship to seem that way in order to make the reader optimistic about Chelsea and Clint’s relationship together. “Playing Hurt is a delicious, tantalizing love story that will captivate you until the final, satisfying sigh.”- Kristin Walker. I couldn’t have put it better myself.
The uniquely relatable characters are only one factor of why this story is so addicting; both the conflicts and themes make this novel genuinely astounding. The conflicts, internal and external, cause the reader to overflow with sympathy for the characters while the strikingly motivational themes piece them back together. Chelsea and Clint, who alternate every chapter, tell the story in first person. This style of writing gives a 360-degree view in the brains of the two main characters; therefore the reader has a better understanding of how the characters feel at all times. One of my favorite quotes from Chelsea’s side of the story is, ”I feel as exposed as a sweatshirt worn wrong-side-out, or like pocket linings dangling outside of a pair of jeans. My heart, my hope, hang in the afternoon sun”-Holly Schindler, Playing Hurt. Overall, the style of writing, the characters, the conflicts, and the themes all assemble into a novel that is incapable of being put down.
The essence of hard decision making and taking chances are shown in between the beautifully written words of Holly Schindler in Playing Hurt. The realistically relatable characters capture the reader instantly and the conflicts are used as fuel for the reader to continue reading on until the events in the story become so captivating that it becomes a real life situation that is so vivid in your mind while you read that it’s practically tangible. Being able to experience a book is far better then simply being able to imagine it. Also, reading shouldn’t have to be counting the number of pages your supposed to read or counting down the minutes, reading should be about opening your eyes to stories that are meant to be read and understood through the words and pages of another person’s creativity. Lastly, for the reasons above, I strongly urge you to let yourself be amazed by the striking beautiful style of writing in Playing Hurt. 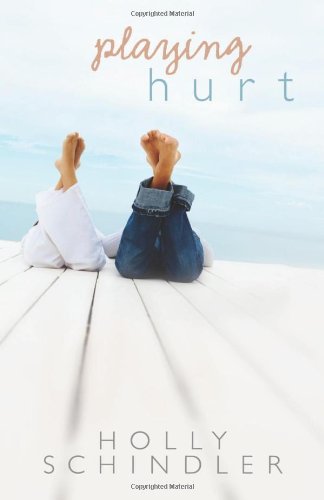