Hoot, a novel by Carl Hiaasen

Roy Eberhardt has arrived at yet another new school, this time in Florida. It’s the same old, same old—get teased, get bullied, sit in the corner alone. Meanwhile, acts of vandalism are being commited at Mother Paula’s All-American Pancake Corporation’s construction site. One day, the resident bully Dana Matherson tries to strangle him on the bus, Roy punches him back, and Roy is made to write an apology letter to Dana, of all things. But that’s okay, because if Dana Matherson had never smooshed his face up against the window like that, Roy would have never seen the strange boy running barefoot down the street.

This sets off a long chain of events. He investigates the running boy, which leads him to new friends, peculiar Mullet Fingers and the tough girl Beatrice, and soon enough they’ve found themselves a cause. They begin waging an environmental war against a pancake house to save the endangered burrowing owls, and drag the entire town into their schemes too.

Hoot is an easy read, with an entertaining plot and engaging characters, particularly for any environmentalists out there. The crazy, slapstick sense of humor will appeal to wider age groups, however. Those characters get themselves into the most bizarre situations. It’s seriously worth reading the whole book just to see Beatrice tie Dana to the flagpole in his underwear. 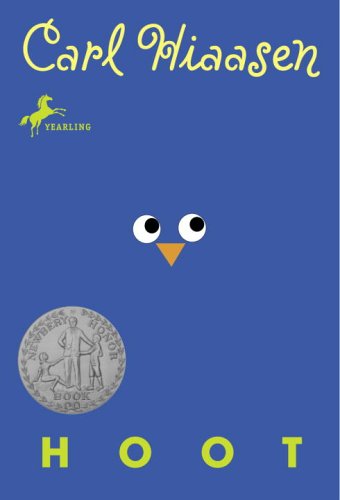 
Buy from Amazon
The author's comments:
This was funny. I don't remember much else, but it was funny. What else does anyone need?
Post a comment
Submit your own