I recently read Misery by Stephen King and I found that it was a very good book. I think that it is an amazing book that you should read if you enjoy Stephen King books.
It is about Paul Sheldon, a famous writer in the book. He wrote many books and among his most famous was the Misery Series. He wrecked his car in a ditch in a bad snow storm, in a small town called Sidewinder, Colorado. His "number one fan" Annie Wilkes finds him. She brings him to her home, which is about 5 miles away from anything at all, to take care of him, and she used to be a nurse. While she helps with his shattered legs, she doesn't always take such good care of him. She beats him up and makes his leg injury worse. She also gets him addicted to prescription medication. Of course she reads his famous series and is mad to find that he killed off the main character in the book. She holds him hostage in her home and demands that he write her a story for just her, Misery's Return. While in her home, locked in her guest bedroom, Paul Sheldon realizes that Annie Wilkes has a violent past. She had killed over 30 times. He fears that he may be next if he doesn't get out of there soon, even if that means killing her. He nearly escapes alive, with the help of the police. Then when he goes back to his normal life he thinks her sees her popping out of the shadows everywhere.
I recommend this book to someone who loves reading and Stephen King books. I will warn you that it does have profanities and some descriptions of what she does to him. 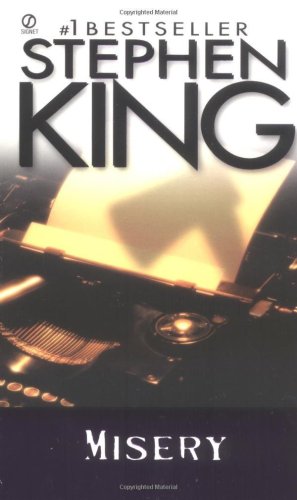