This is, quite possibly, the best vampire book I’ve ever read. For one thing, none of the vampires fall in love with anyone (um, no offense to rabid Twilight fangirls). They’re not even nice. In fact, with one notable exception, all the vampires are bloodsucking malicious creeps.

But anyways, the book takes place in this alternate universe where all kinds of supernatural things are real and the humans and the “Others”, AKA vampires, werewolves, demons, etc. kind of coexist and kind of try to kill each other, depending on the situation. The important thing is that vampires are always evil.

The main character is a young woman, Sunshine, who works at her family’s coffeehouse and bakes all these mouthwatering pastries and pretends she’s totally normal even though she’s really not. This works fine until she’s kidnapped by a gang of vampires and locked into a room with a fellow prisoner, who just happens to be a really hungry vampire named Connie. But he doesn’t eat her, and she uses her powers to get them out, and then they have wrathful vampire gang leader trying to kill them both. Things obviously go downhill from there.

The cool thing about this book is that it’s really, really vivid. It’s told in first person by Sunshine, and she sounds a lot like I’d imagine any normal person would if they had experienced what she did, complete with a very sarcastic sense of humor. She goes off on tangents a lot, just about her world and her life in general, which tie back into the story in the end and brings realistic details to her entire world. Sunshine—and, really, all the characters—is surprisingly believable, considering the premise. And, as long as you don’t mind the supernatural, there’s something for everyone, be it peacefully baking head-sized cinnamon rolls or exploding vampire guts all over the alleyway. This book is the kind you can curl up with and sink into, to live someone else’s life for a while. 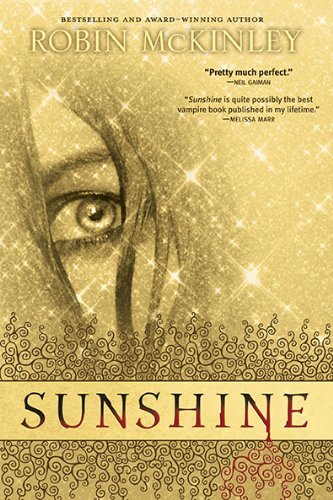 
Buy from Amazon
The author's comments:
I've been writing book reviews for my local library, and I though, hey, why not stick them online too? So here they are, of all teen reading levels and genres (though I do have a tendency towards fantasy). And Sunshine really is a lovely book.
Post a comment
Submit your own