Searching for David’s Heart by Cherie Bennett
Has been reviewed


Searching for David’s Heart is a heart warming realistic fiction book, written by Cherie Bennett. This book is a touching story. At Darcy’s house, things aren’t always great. Her mom works double shifts just to cut it and when her dad didn’t get that promotion due to his back and a test, he blames it on Darcy. Her Meemaw is also very sick, and she needs someone in the Happy Appleton Acres Home to care for her, which costs them lots of money. That’s why money is tight at her house. Darcy and her brother, David was best friends, until David gets a girlfriend and starts to treat Darcy differently. Darcy despises her and calls her the J-word, as if her name was a bad word. On Darcy’s birthday, her and David get into this huge fight, and runs off. David chases after her and is accidently killed in a car accident. Darcy blames herself for his death. His heart is donated for a transplant. Darcy thinks is she finds the donor who has his heart, she will have found her brother and in some sort of way, he’s alive. Darcy needs David to forgive her. Darcy and her best friend, Sam Weiss begin to search for David’s heart.
Darcy Deeton and Sam Weiss were both clever risk-takers. They don’t tell their parents where they are going and cut school and just leave. They go on a bus going to Miami, but when they just started to have fun at the bus break at the carnival, the carousel breaks down and the bus leaves without them. The bus had all their belongings including all of their money. Just to make some extra cash, Sam challenges Amazin’ Eddie performing the metamorphosis trick. Sam succeeds, but Eddie ratted them out to the police saying they stole the audience’s money. They sneak into Daisy the donkey’s trailer. Darcy and Sam do not where it is going, but take the risk of going on it. When they finally arrive to Florida, they slept with a bunch of runaways on a beach, when the sign at the beach said No camping! Beach closes at 10pm! All violators will be prosecuted! They will not stop until find David’s heart.

Winston Pawling is a caring person. At first, Darcy thought Winston would be a brat and not grateful for having a heart from such a wonderful person, but then she finally meets him. Winston Pawling is so nice. He offers her and Sam to come to his house and have lunch. Darcy finally has the courage to tell them who she was, and what Winston had of theirs, Winston took her to a special place. He had pictures hanging up on the wall of all his heroes, and David Deeton was up there. That made Darcy feel better to see her brother’s face up there. Then she asked him if she could listen to his heart which was David. Darcy now knew that to learn to live with her mistake because life goes on. There were many significant events that gave one the feeling of “déjà vú.”

One significant event was when it was Darcy’s birthday. David brings a not invited guest and Darcy is mad. To make it up to her, David invites her and Sam to a concert in the park. Darcy refuses to go. She later decided to go to the park and apologize for the way she acted. She accidently overhears David talking behind her back. Darcy is furious and screams to David I wish you were dead! And runs off. David chases after her. Darcy hears behind her cars beeping, cars screeching and people screaming. She realized her wish about David came true.

Another significant event was when Darcy and Sam found Winston Pawling. Winston had David’s heart from a transplant. Darcy was so happy she found his heart, after the long trip to Miami, she made it! It was really a miracle for Winston because in order to have the transplant, he had to have the same blood type as David, and he did. The search for David’s heart was finally over!

For another review, see:
http://revivehope.typepad.com/revive_hope/2007/06/searching-for-d.html

“Bennett pulls you in as a reader, whether you are 12 or 50, she really connects you with the characters. This book will make you feel numerous emotions...sadness, disparity, happiness, embarrassment, love, and joy! It made me laugh and it surely made me cry!!” 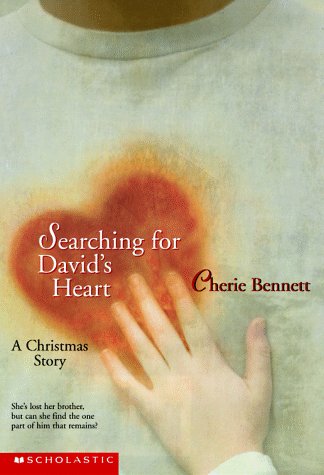