Peter Pan in Scarlet is the only official sequel to Peter Pan, originally written by J. M. Barrie. It is a delightfully charming tale of Lost Boys, now Old Boys, who are plagued by dreams of Neverland, and decide that a return is in order. There, they find it is fall in Neverland, something that has never happened before. Though at first Peter Pan, now the One and Only Child of the Never wood, does not remember Slightly, the twins, John, Curly, Tootles, or Wendy, their days are soon filled with adventures and fun, until the twins set fire to the wood and they must escape to the sea. They meet the mysterious Ravelling man, covered in wool and asking them what they want to be when they grow up, and together they journey to the Never peak, to claim the “late” Captain Hook’s treasure.

This book is written in a childlike form, innocent in logic and the way that things are explained. For example, when Slightly wishes to become a boy again, he must only look at the end of his bed, and this is explained as, “I went down to the foot of the bed, you see! Haven’t done it for twenty years! Right down to the end and beyond! I remembered, you see! You can end up anywhere if you dare to go right down to the bottom!”

This book is a wonderful portrayal of endless imagination and friendship, as shown when the League of Pan is aboard Hook’s ship. They had gotten into a fight over who should get what share of their bounty, and had said very mean things to each other. After the fight however, they remain friends, with no hint of bitterness or mistrust, for “the unkind things said could not be rubbed out, but they folded up very small and could be slid away into pockets.”


I recommend Peter Pan in Scarlet to children from ages 5-105, because of its universal themes of love, friendship, happiness, and that if you imagine, anything is possible. 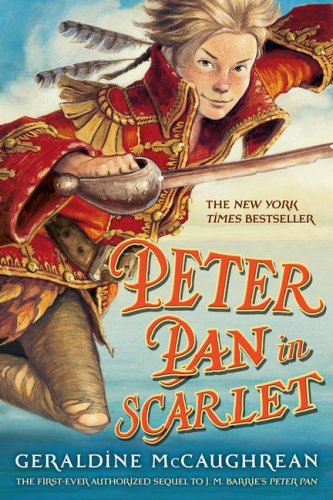