Panic and total darkness is the first thing the reader reads in the book Moonlight Becomes You by Mary Higgins Clark. Moonlight Becomes You is a murder mystery about a woman named Maggie. When her stepmother Nuala is found dead Maggie sets on her own to try and figure the mystery out. Problems keep arriving though and all her connections to Nuala seem to be dying out, literally. Maggie almost loses hope until she finds something chilling at a few graves. Every grave, including Nuala’s and her friends, had a little bell, identical to each other. Soon Maggie finds out what the bells are for, but is caught up with the plans of the murderer and finds herself buried alive! This is a great book to read, and is now one of my favorite books, but it could use a little fixing up. The main thing that it needs is to have the ending reconstructed. It needs more information about the murder and less extra information added in.

For one, this book’s ending needs more information about the murder. In Moonlight Becomes You, Mary Higgins Clark explains the plot of Liam, the murderer, quickly and with little detail. The reader can get lost very easily if this happens. It makes is harder to understand and makes the reader left wondering. Sometimes it’s good to leave the reader with questions, but not in this case. If the reader is confused, it takes away the magic of the story and may cause to reader to be upset or disappointed. No one ever really wants to feel upset after reading a story. If I were Clark, I would have explained Liam’s plot with more detail so the reader understood it more. This would make the ending less confusing.

Another thing that is a little upsetting about the ending is that Clark doesn’t give you all the murder information. She stays brief and talks more about what Maggie with do in the future and does not sum up what happened. Since in the chapter before the reader only just finds out who the murderer is, but he is not caught yet, and Maggie is just saved, it’s vital that the author explains/sums up what just happened and gives the reader all the important information. Without it the reader will not understand, which is not a good thing. If I were Clark, I would have maybe wrote one chapter that included the arrest of Liam and his confession including the details of his plot. I would then write a chapter about what Maggie does in the future, maybe have the details of Maggie in an epilogue so the information was spread out more. This would have made the ending a little better.

Mary Higgins Clark is a wonderful author and Moonlight Becomes You is a terrific book, it just needs those few fixes. More details and maybe more chapters would make this book even better! Still, all and all, this is an amazing, suspenseful, entertaining book that is full of panic, murder, love and friendship. I would recommend to anyone who’s interested in mysteries, murder stories, or just a good book to read. 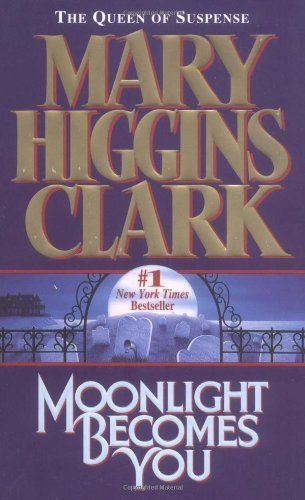 
Buy from Amazon
The author's comments:
I wrote this last year for a school assignment, and decided to post it on here. THis was a really great book, but I don't know if this piece is any good. It was created based on classroom restrains so...well I hope u enjoy it, and please look at my other, more creative, pieces!
Post a comment
Submit your own