The Hunger Games could easily be called one of the best books since Harry Potter or the Percy Jackson series. And like many books after they first come out, it is growing very popular, having won many awards, and with its interesting mix or action and romance, it’s a gripping read, a series I don’t mind having to pay $17-18 dollars for. It’s a series that could easily bump Harry Potter off its famous pedestal and easily surpass Twilight as the most popular teen book series.

What exactly makes the Hunger Games so appealing? Perhaps it’s the interesting story, one that’s pretty new and original. You’re introduced to Katniss Evergreen, finally introducing a strong lead female character, one I haven’t seen in years. And you can shout out now at my review saying; “What about Bella from Twilight?” And my answer? Well while Bella is a cardboard cutout of a person, a girl who relies on the men in her life, and has absolutely no depth what so ever, Katniss easily picks herself up when she falls, is independent and quick thinking. Katniss lives in a world called Panem, all that remains of North America after its destruction, and it consists of 12 different districts and the ‘Capitol’ where the president and the lucky, richer, people live in luxury. In the past there was an uprising against the Capitol by the rest of the Districts and after they were suppressed, as punishment each District must send two tributes, a boy and a girl to fight in the Hunger Games, a violent game to the death, all on live television. Katniss is chosen and so is a boy called Peeta, the son of the local baker. During the games, she is not sure is she is in love with Peeta or not…because there is another boy called Gale, a childhood friend who she also has feelings for.

So here we are introduced to the romance part of it, and surprisingly it is a complicated, intricate romance, where Katniss is torn between both of these men, and while we’ve seen this before, it somehow works in this series. You actually CARE who she picks, because she has many good reasons to feel torn between the two and you feel sad for Gale and Peeta, as each are let down by Katniss in turn as she makes her difficult decision. But here is the brilliance of the series. The whole story is not overtaken by the romance part of it, with just an equal amount of action and a survival story making it appealing for both boys and girls. The story takes you on an emotional journey as you experience loss, sadness, romance, hunger, pain, suspense, and even at times, a good bit of humor is thrown into the mix.

Suzanne Collins, the writer of this series, has written a brilliantly written series, after what I felt was the disappointing let down of the Underland Chronicles. I tried to read those books but I grew increasingly bored and eventually gave up. Suzanne Collins has grown as a writer herself. She gives you an interesting perspective on human nature, and when it may be the right time to stand up to something when you know it is most certainly wrong, which Katniss gradually does as the series goes on because Katniss sparks a rebellion as she tries to fight the overshadowing cruelty of the Games, President Snow, and the Capitol. The games test Katniss’ moral value, and also her depth as a person, and shows how frightening war and death can be. But Katniss is not the only complex character because Collins somehow manages to make each character personally compelling, whether she wants you to hate them, feel bad for them, laugh at them, or cheer them along.

Suzanne has written a masterpiece, where the many characters have been written extremely well, and features many strong themes that sometimes must be faced when you’re trying to survive. The story moves at a perfect pace, and never grows boring. I do warn you, that if you’re looking for an action packed, blood fest, where the book entirely consists of action, look somewhere else. And if you’re looking for a cheesy romance novel look for something else as well. But if you’re interested in a happy medium between the two, this is the perfect book for you. Because trust me, once you’ve read these books, you’ll want to read them over and over again. 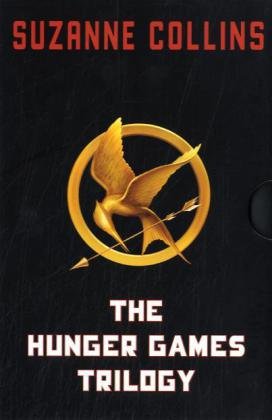 
Buy from Amazon
The author's comments:
In this review, I don't necessarily include a critique of each individual book, but as a whole. I really hope you enjoy my review and go read the book!!!
Post a comment
Submit your own

View profile
two things first i agree the hunger games was great it was sad and happy plus action packed. however i disagree about the underland chronicles they were allmost but not quite as good as the hunger games aside from that great article.
TheBug BRONZE said...
on Jun. 18 2011 at 1:07 am
TheBug BRONZE, Uniontown, Kentucky
3 articles 0 photos 25 comments

Gale was a great antagonist, and he had his good pieces. In the end though, when you compare him to Peeta, Peeta compliments Katniss better..

err, that's at least my opinion.

I adore The Hunger Games series. I've read them all & I am, and always will be Team Peeta. :) Just so you know, this is probably one of the better book reviews on this particular subject, and I've read the author reviews in 'The Girl On Fire'!

Have a great day, and keep writing:)

You are so right that Bella from Twilight is a card board cut out. Too many books these days are like that, trying to tell us girls that we are nothing without men. Great reveiw, I enjoyed reading it.

Oh, and on the subject of dumb sexist books, if you want to read something that isn't like that try The Song of the Lioness books by Tamora Pierce. They're awesome!

Favorite Quote:
"The only thing we're allowed to do is hope that we won't regret the decision we made."

View profile
Hmm.. this sounds sooooo much more interesting than Twilight. And I'm not saying that because I'm not a big fan of Twilight at all.
Healing_Angel SILVER said...
on Sep. 15 2010 at 6:18 pm
Healing_Angel SILVER, Sydney, Other
8 articles 2 photos 509 comments

View profile
I've just read it and it is a great book- Mich better than twilight!!
twood said...
on Sep. 15 2010 at 2:02 pm
I love the Hunger Games. This fast-action read is fun but exciting. When I started reading it I couldn't put it down. Go team-Peeta