The Afterlife by Gary Soto

Most people think that when you’re alive you live life to the fullest, not after death. That’s not pondered on in a majority of conversations. Just live your life while you have a body and don’t fret about where you go when you die. Chuy thought that way, as much as the next guy. He tried new things like track although he was not the macho jock on the cover of Sports Illustrated. He had a one-track mind—girls. In fact, the moment of his death, he was supposed to be on a date with the girl he’d been friends with in childhood. Chuy’s mind soon changed about his life being lived to the fullest.
Chuy had become acquainted with two other ghosts. Had it been destiny or just the normal layout of well, life? Each of them brought to death by individual reasons, Chuy, Crystal, and Robert Montgomery had lived their lives differently also. Chuy was just a typical teenage boy loitering around in the bathroom. He was all smiles for the school dance with his date, Rachel. He’d thrown a vague compliment to the teen next to him: “I like your shoes.” They were distinctive yellow shoes, bright enough to force you to squint. Chuy thought of it as just a meaningless bit of prep for the dance, but that was not the thoughts of the wearer of the shoes. He’d spun on his heels and stabbed Chuy—to his severe death.
When Chuy thought he was the only seventeen-year-old who’d lost his life so young to an event or decision so tragic, he soon thought otherwise. Crystal’s death was brought on by such a startling decision—the decision to commit suicide. Many may think of this choice as preposterous, but when you have such a flawless reputation like hers, you tend to think that you won’t be able to keep up with it. She was a gorgeous cheerleader, a medal-winning track runner, and the vice president of her high school in Selma, California. She was what some would consider spoiled and while, lying back to her own leisure, she saw Chuy. That had been five years ago, when Chuy had worked on her father’s grape farm. To some this may seem like a coincidence, but I’m not talking just meeting up at a supermarket, this was the afterlife!
After showing Chuy her death spot, Roeding Park, Crystal and Chuy came across an ill, homeless and elderly man. His fever had been rising through the roof as he leaned on a tree. Chuy would’ve hated to see another horrific death occur, so he pressed his touch of death to the man’s dingy forehead. The man had lived through the night, but passed during the daytime. When Chuy saw his ghost, he barely recognized it, for he was more youthful and handsome. After explaining his death to Robert, Chuy was confused to find Robert had the growing covet to seek vengeance on the murderer of Chuy. Robert had slipped into the killer’s body and made a vigorous attempt to shake him up a bit. Without the burden of his murderer still being alive, Chuy had more time to cherish his life on Earth before his spirit perished into heaven.
Through Chuy’s words, his thoughts, and his body language, he is implying he hasn’t yet completed the voyage of life. He’s had a glimpse of what you’d call a romance, but hasn’t seen the rest. He’s experimented new activities and some weren’t fitting for him, but he gave it his all. To carry-on with this completion of life, Chuy meets Crystal in the afterlife. Crystal is like a blooming flower in the garden of his life—she has taught him romance, love, and that when he thinks life struck him hard, he should turn the other cheek. This quote is kind of ironic when put next to this book, Chuy’s days in the sun are spent mostly in the afterlife, instead of the life when you have a body. 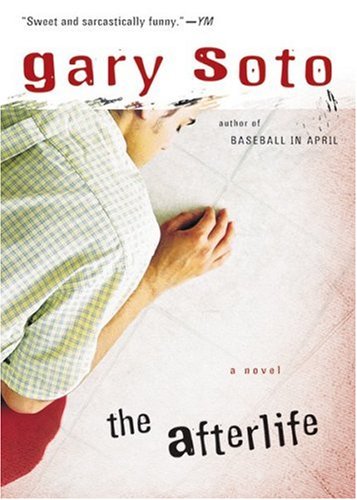