I'd Tell You I Love You, But Then I'd Have to Kill You by Ally Carter | Teen Ink

I'd Tell You I Love You, But Then I'd Have to Kill You by Ally Carter

“The Gallagher Academy for Exceptional Young Women is a fairly typical all-girls’ school - that is, if every school taught advanced martial arts in PE, the latest in chemical warfare in science; and students received extra credit for breaking CIA codes in computer class.”

Cammie Morgan is a second generation Gallagher Girl and, though she’s only a sophomore, she’s already fluent in fourteen languages and can kill a man in seven different ways (including one technique with a piece of uncooked spaghetti). She’s known as “The Chameleon”; she can blend in anywhere at anytime, completely unnoticeable, or so she thought. On her first undercover mission an ordinary boy picks her out of the crowd and begins talking to her, almost blowing her cover completely. She makes it away safely, though her partners – and two best friends – were discovered by the Target (an unaware teacher) and promptly taken back to the Academy. Cammie is forced to make her way back on foot, and finds that she can’t get this boy out of her head. The Gallagher Academy has prepared her for everything, but the one thing she isn’t prepared for is what to do when she falls for an ordinary boy who thinks she’s an ordinary girl.

I’d Tell You I Love You, But Then I’d Have to Kill You is the newest addition to my list of favorite books, and I am eagerly awaiting the next novel in the series. The book was extremely well written and I found it impossible to put it down.

I GIVE THIS BOOK FOUR AND A HALF OUT OF FIVE STARS! 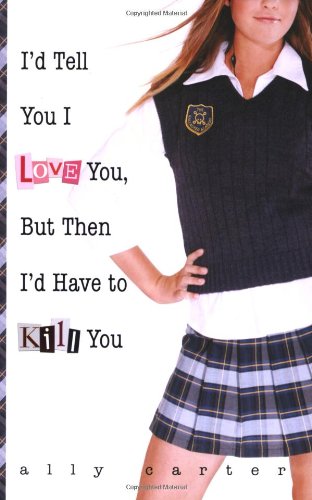