A Fantastical Flight of Fantasy

"It's just a career," said Sir Braveknight, Esquire.
"It's out of the frying pan, into the fire.
Never, no never," quoth he, "shall I
Be married to anyone. I'd rather die.
Saving damsels in such perpetual distress
Is mostly just one big fat hairy mess.
I shall not let feminine romantic ways
Make an end to my happy, unpromised days."
So spake Sir Braveknight, not anticipating
The circumstances even then awaiting.

The very next day, poor Sir Braveknight found
That awakening him was a terrible sound.
"The roar of a dragon, that is," quoth he.
"I know that sound. Nothing else can it be."
So he leapt out of bed like a truly brave knight,
Jumped on his horse and was off to the fight.
He discovered the dragon after some miles' roam
Roaring frantically into the deserted home
Of a princess who had fled to the sea years before
And never come back to the home kingdom more.

As it happens, then Sir Braveknight rode thence
And found the poor dragon exhausted and spent.
"For you see," said the dragon, his voice raspy and raw,
"You can't frighten nor eat someone who's gone."
Sir Braveknight agreed, and that's when he said,
"Dearest dragon, I'd rather not be eaten in her stead,
But I can help you find the princess who fled.
That is, if you like," he told the dragon's large head.
"I'd love to be helped," said the dragon happily.
And away they went towards the princess' sea.

On the beach sat the princess, in modern attire.
Poor Sir Braveknight was headed straight for the fire.
He stood for a moment, quite unabashedly awed.
The princess noticed him staring, and scowled.
"What are you looking at, you circus freak, you?"
Said the princess. "Don't you know that's rude?"
Sir Braveknight stammered. He stuttered. And said,
"Beg pardon, madam, I'm losing my head."
"Not much to lose," the princess muttered aside.
"And what's with the armor, anyway?" she asked, snide.

Sir Braveknight started to answer, but then
The dragon, suddenly impatient, jumped in.
"Pardon me, sir, and madam so sweet,
But I'm having a hankering for some fresh meat."
The princess, she yelped, and darted away.
Sir Braveknight chased her for a year and a day,
Over many a hill and a dale without rest.
(The dragon gave up and went home depressed.)
And at last did he catch her, under a tree
Somewhere in the middle of Mississippi.

Now just how they got there I don't quite know.
Sir Braveknight was actually from Ohio.
And the princess' beach was in California.
Something about this doesn't add up.
But there they were, in the green Southern state,
And Sir Braveknight had a statement to make.
So he planned carefully and made up his mind,
And hoped that the princess would respond in kind.
He wished to profess his undying love
And ask her to marry him, nothing short of.

So he waited for the next beautiful night
And made his makeshift palace an impressive sight.
He got fine food and an Italian tenor to sing,
He got flowers and moonlight and even the ring.
He asked her the question there under the moon,
She didn't say yes, or I'll tell you soon,
But instead, "Absolutely not, you stupid knight,
What do you mean by all this moonlight?"
And with that she ran off into the night,
And Sir Braveknight said without delight,

"I didn't think she'd be quite so opposed.
Well, it's like my father told me, I suppose.
It's hard to deal with women, he said.
Sometimes with the worst kind you're better off dead.
I wouldn't have minded a princess, of course.
But nothing less unless it was positively perforce.
My father told me saving damsels in distress
Makes for one especially darn tricky business.
How do you rescue a damsel like a true knight
When there isn't a single damsel in sight?" 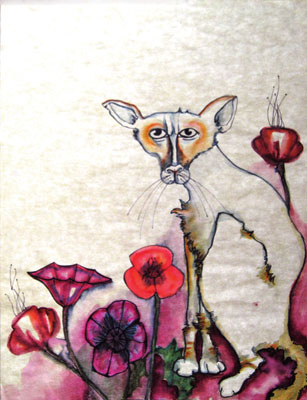 The author's comments:
I just sat down at the computer and let my imagination run wild. Try it sometime. :)
Post a comment
Submit your own

Favorite Quote:
I am more than i appear...