The Tale of Oroya and her Horses | Teen Ink

The Tale of Oroya and her Horses

Oroya was not born.
She simply woke, woke in a body,
a body with fingers, toes, eyes, and a thumping heart.
She woke a child, trapped in a wonderous, marvelous, peculiar land.
Oroya was the only human,
but she never knew of loneliness,
for she never knew what company was like,
save the company of the wind, the rain, the sun, and the animals.

Her secret land sprawled for infinite miles,
and she explored every inch of them, every day,
until her limbs grew long, and her body began to curve,
and there was only one more Mile left,
one slice of land which she had not yet tasted.
She always skirted the edges of the shadowed corner,
dipped her toes in the water of a stream that disappeared round the bend,
into the unknown Mile.

Finally, on a day which blossomed from a promising rosy dawn,
Oroya rose from her bed of various foliage and
squinted against the glorious sun,
her eyes flitting across the purple mountaintops,
blinking against the sparkling water,
until she found the Mile.
It was a curious piece of woods, shady even in high noon.
For it Oroya took off, running through the miles
which she already knew, shamelessly naked as she was every day.

Just as the sun began to settle, Oroya skidded to a stop
at the bank of the stream.
Trees creaked in the wind, branches swaying, beckoning her in.
Slowly, she entered the Mile.
Foreign twigs scraped at her skin.
One slashed across her breast, and she whimpered.
Frightened, she turned to leave the Mile.
It was different than the others,
not full of buttery sunshine and whistling birds.

A sliver of color winked from between the trees.
Hypnotized, Oroya ran for it, ran and ran,
until she paused at a pool, bursting and writhing with
colors she had never seen before.
She stretched her fingers and skimmed the rainbow water.
Violet, scarlet, turquoise... all the hues dripped from her fingers.
She plunged her arm in, and it came out streaked with colors.
Oroya hung her feet in the pool, marveling at the whirling water
for hours and hours to come.


That night, when the sky was inky and black,
Oroya was disturbed by a muffled rustling.
She scrambled out of the pool and scanned the forest.
When a ghostly white shape emerged,
she recognized the animal immediately.
It was just a horse, just a plain, white horse.
She had seen them many times roaming the fields.
Another one followed the first, and she approached the two animals.
"My friends," she said. "What has brought you all the way out here?"
The horses replied in their gruff voices:
"Oroya, here is the water which paints this land with color.
Without it, we all turn black and gray and white.
This pool is a gift, but we mustn't waste it."

Oroya reached out to pet one of the horses.
She ran her fingers over and over their soft fur,
over their backs and flanks and legs,
leaving streaks of rainbow water.
Soon the horses were completely striped with lines of color.
They were so beautiful to Oroya
that she lured the other white horses to the rainbow pool,
and stroked them for minutes upon hours upon days,
until there wasn't a single pure white horse in all of the land.

Some time later, Oroya returned to the pool and dunked her arms in,
only to find that they were hanging in air.
Frowning, she slid her hands along the edge. The dirt was dry.
She peered over the bank. To her horror,
the magical rainbow water was gone, and the pool was empty.
Her friend's words echoed through her head:
"Without the water...without the water..."
The sun flickered and blinked out. The trees hunched and shriveled.
The billowing fields of green grass moaned and faded to gray.
The blue of the sky drained into nothing.
Lastly, Oroya's beautiful horses lost every streak of color.
Their white coats, once striped with rainbows,
were now layered with ribbons of black.

Without the beauty of her land, Oroya laid to rest,
curled up in the dry crevasse where the pool once was,
and never woke.

As for the now black and white horses,
somehow, some way, they escaped the mournful, wasted land,
and found their way into the world we live in.
This world wasn't just about color and beauty,
in this world there was also sadness and darkness,
and their black stripes turned out to be not so bad after all. 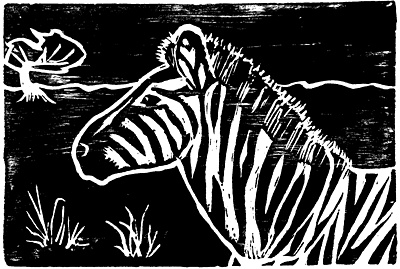 Favorite Quote:
"You have not even begun to scratch the surface of how important your life means to not only me, [y]our friends and [y]our family, but your life, which is a gift for the world that is waiting for you." - Brent Smith.

View profile
a refreshing change from what most poems are. beautiful imagery, and sound devices paint the picture so clearly its like im standing right there, watching oroya and her horses. dont listen to hbic. he obviously has no taste in poetry ._.
LiraDaeris PLATINUM said...
on Apr. 20 2013 at 3:38 pm
LiraDaeris PLATINUM, Tucson, Arizona
22 articles 0 photos 135 comments

View profile
This has some absoluetly delectable imagery in it, especially within the first few stanzas. The description is amazing in other places as well. However, I did notice this was submitted under Free Verse Poetry. I feel as though this could be better attributed to a Fiction Writing piece. That doesn't change how beautiful the waords are crafted, though. Splendid job.
hbicniqqa said...
on Dec. 12 2012 at 4:45 pm
hbicniqqa, Burnham, Maine
0 articles 0 photos 1 comment

Favorite Quote:
As I look back on my life, I realize that every time I thought I was being rejected from something good; I was actually being re-directed to something better.