the point at which creation begins,

what does it matter, ma!

and in between lies

why does it matter!

a single tear-drop of a million

get rid of it!

they watch with their third

and warn of the trap

you don’t need it anymore!

just as the eyes lure in radiance and

the burden of a spiraling trap of

disowning what brings tenor in life

a moment of heat, brief security,

like the wind coerced into a cocooned gossamer veil,

I felt as I walked with her, gripping her fingers,

as eyes peered up at the middle of her forehead

and pierced through the veil,

why do you still wear it ma! I had asked,

“they look at you funny and keep

asking me these silly questions!”

questions that I had no answer to

so I screamed with my lidded mouth,

clenched my anxiety tightly within my fist,

because how was I to know the reason why

you cling on to that dot as hard

as it clings on to you,

as you give it meaning,

a mutual bond, agreement, of sorts to remember where

you, and I, and it comes from,

when, I wonder, did my feet fall into step again

that align the speckle between my brows,

and offer another dimension to my

In the Nasadiya Sukta (Hymn of Creation), the middle of the forehead is said to be the point at which creation begins, the seat of concealed wisdom, and the focal point of the subconscious mind that serves as the third eye.

In the Bangladesh Liberation War of 1971, which was partially religiously motivated, hindu women were easily identifiable and targeted because of the bindi on their forehead. They were brutally raped and murdered, and yet they continued to square their shoulders, tighten their sarees and raise their heads in an attempt to fight back. They were not going to have their culture torn away from them as easily as one can tear off a bindi 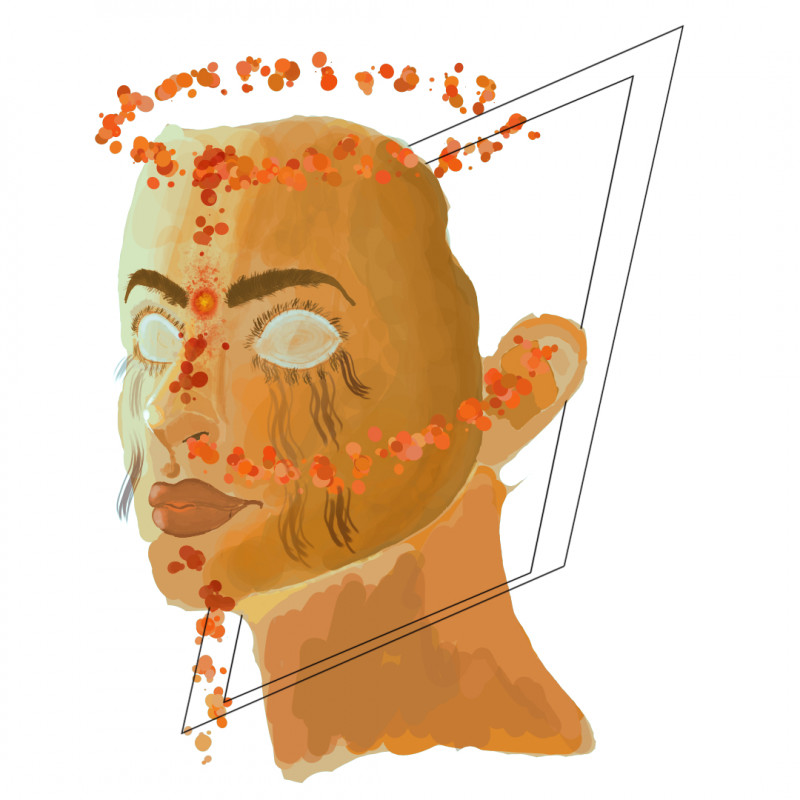