It’s a sound so deep and wide and close by,

far away and annoying and sweet,

indistinct and ethereal and ceaseless—

on a black night of shining seatbelts.

ten hours on the road.

The sky is turning. The earth is churning.

Time is like the batteries in the toy caterpillar—

There’s a fireball sun above the Ohio River,

filling up the sky with water vapor and loneliness.

Huddled against me, sleeping,

like a rock in troubled waters, lies my brother.

The hills, the Wee-Sing Hills,

sweep us like music up and down a staff.

When he has drunk up too many juice boxes,

let him outside to throw up.

When Mother is lost on the winding road,

cry out to God.

And the years I spent staring out car windows

at the black drum of night,

they’ve all dissolved, like Crystal Lite tea powder into water.

What name do you put to the starry feeling of night travel?

What words can you use to describe traveling with brothers?

Now we all have junk rooms inside us.

We lock and bolt those doors,

press our back against them.

Nobody can come in.

Uncertainty and mystery and purposelessness

can drive you harder than knowing all the answers.

There’s a tide in you, deep inside of you.

hot as an oven, a dolphin and a shark,

a spirit meant for eternity

and begging for release, for peace.

Look around you at the misty river,

and run with the children down the bank.

The jar of laughing is never filled up.

The sky can sing you a lullaby,

if you lay down and let it. 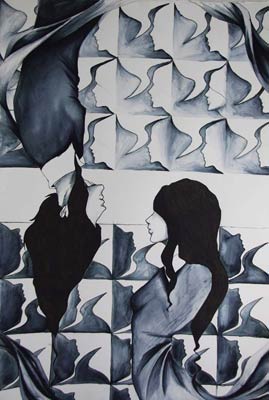 This is inspired by a 1976 song called The Fuse from The Pretender album.

View profile
fireball sun... if my English teacher got ahold of that he might get so excited he'd have a heart attack and die, and you'd be charged with murder be careful with amazing, beautiful langue...(;