Who and What is the Devil. | Teen Ink

Who and What is the Devil.

For years, people have been talking about 666, the supposed number of the beast. However, due to some theories that the beast refers to Nero, one of the emperors of Rome, there have been many debates whether this is the true number. Other theories have evolved, accusing other people, like the pope, and Ozzy Osbourne.

Nero’s full name, Nero Caesar, when written in Hebrew, (Nron Qsr), using a system called Gematria, or number values for each letter, spells out 666. However, in the Greek spelling (Nro Qsr) the Gematric spelling forms 616. Further evidence suggests that this Hebrew Gematria rises from a possible conversion to Judaism. This raises the question. Is it a scribe’s error, or is it a simple discrepancy yet to be unfolded by time? I personally believe, that it is both. Perhaps, the scribe made an error that sparked this discrepancy, which has since then, spiraled outwards. Once this formula was explained, it was then applied to the Pope, a quite unlikely suspect.

The pope, who claims to be “Vicarius Filii Dei” or “A Substitute for God” may also have some significance in this matter. When translating Vicarius Filii Dei, a Latin phrase into Gematria, the value comes out to 666, as many of the letters in the title do not have a numerical value. Some people are saying that there is overwhelming evidence towards this claim, but it has yet to be seen, and the Vatican refuses to admit that the title is actually used.

Despite the Vatican’s best efforts, official Papal documents use the phrase, “I, Vicarius Filii Dei”. Is this incriminating, or is it simply a long string of mistakes and selective mis-information? That is for you to decide, and for you alone.

The idea that the Pope’s three tiered tiara has the words, Vicarius Filii Dei, is currently on thin ice, as no one has officially seen the words. The Vatican refuses to show the tiara, and has only submitted a drawing for inspection by the outside world, and drawings can be quite easily fudged.

As an aside, there have been thousands of conspiracy theories about who is the antichrist, including some ludicrous claims like Bill Clinton, President Barack Obama, Pete Wentz, and Al Gore, Ozzy Osbourne, George lucas, Pink, atheists, and some not so crazy ones. These include Marilyn Manson, Kurt Cobain, and Stan Lee, the creator of Marvel.

From this evidence, or lack thereof, one cannot incriminate anyone as the anti-christ, or determine the true number of the beast. Therefore, it must be said, without further investigation, this must be put on hold. 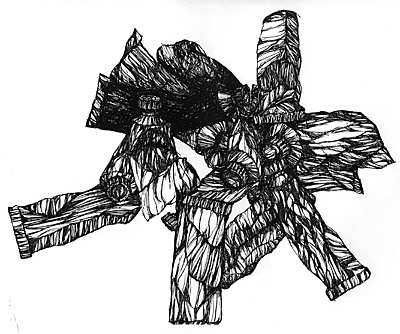 The author's comments:
I have always been interested in conspiracy theories, and this story is no exception. This purely subjective, and not meant to insult anyone or any group.
Post a comment
Submit your own

View profile
I highly doubt that the Pope is the anit-christ. He wants everyone to believe in him, and the pope is respected by many people, including many catholics.
BlueRain BRONZE said...
on Jan. 6 2012 at 3:11 pm
BlueRain BRONZE, Clarkston, Michigan
2 articles 5 photos 254 comments

View profile
I swear, this is the generation of unnecessary paranoia.
Jesusisalive BRONZE said...
on Mar. 26 2011 at 2:11 am
Jesusisalive BRONZE, Neosho, Missouri
3 articles 0 photos 14 comments
View profile
There will be an anti christ. He could be living as we speak. ( And he probally is considering that so many things that are happening in the world are pointing toward the tribulation ) We don't know who he is yet, but Christian's will probally know who it is when he shows up. The mark of the beast will be 666 as that is what it says in the Bible. God did not lie when he said that. So it is true that the mark will be 666. Look it up in the Bible if you don't belive me.
Peregrine said...
on Dec. 18 2010 at 6:01 pm
Peregrine, Roosterville, Other
0 articles 0 photos 38 comments

The antichrist is a small boy who loves his dog (well, hellhound in disguise) and is in a gang called The Them.

Wait, you said it's not crazy to call Marilyn Manson the antichrist?  How so? His songs make relevant points about the American Condition.

View profile
I think everyone should spend less time worrying over who the antichrist will be and more studying the Bible. Only God will know until it actually happens
matt7 BRONZE said...
on Jun. 13 2010 at 8:02 pm
matt7 BRONZE, Charleston, Other
2 articles 0 photos 56 comments

Favorite Quote:
"For where God built a church, there the Devil would also build a chapel."
-Martin Luther

View profile
These theories are rather stupid. Anywone who is againts Christ is an anti-Christ. And when the Anti-Christ that is spoken about in Revelation does come, it would be clear to Christians who it is; we do not need to rely on stupid calculations.
Sandiego@gmail.com said...
on May. 13 2010 at 12:58 am
Very interesting stuff. I learned alot. Thanks.
Sandyseesall said...
on Mar. 17 2010 at 12:17 am
The info from the Vatican is so interesting. I never knew this stuff either. Cool article.
LorenToronto said...
on Mar. 16 2010 at 12:19 am
A lot of interesting info in this article that I was never made aware of. Very cool.
politico12 said...
on Dec. 21 2009 at 9:49 am
Always knew Ozzy Osbourne cavorted with the devil! This is a fun article.
wag13 said...
on Dec. 21 2009 at 9:48 am
Very cool article. I never knew about this stuff.
Tobiassays said...
on Dec. 16 2009 at 3:38 pm
Wow, that information about the Pope moniker is very interesting "vicarius filii dei;" but there's so much mystery and secrecy surrounding the Church, who really knows? The article is great!
ReflectionsofYou GOLD said...
on Dec. 16 2009 at 2:17 pm
ReflectionsofYou GOLD, Mason, Tennessee
10 articles 0 photos 107 comments
View profile
This was written well. You wrote the facts in a way that flowed and wasn't boring. Buuuut, since we're in the opinions section, I just wanted to make a comment that the mark of the beast has to do with the antichrist and the tribulation. That is where everyone gets the number from right? So no one that has lived so far has been the antichrist who carries the mark along with his followers. Because if they were the world would be a thousand times worse than it is now[harf to imagine, but yes] But you already knew all this, I'm guessing. I just wanted to say that I don't really think it's a debate at all.I think the facts are all there.
barbiedoll said...
on Dec. 16 2009 at 8:40 am
Cool! I didn't know any of this stuff.
carlo12 said...
on Dec. 16 2009 at 8:38 am
Hey, I'm in Orem's class in Nevada, and we're enjoying your articles. What's the next one about?
oremL2012 said...
on Dec. 16 2009 at 8:36 am
There sure have been some pretty evil people in this world whom we might like to think carry the 666 sign; it's so wild to ehar the theories, though.
jbl13 said...
on Dec. 16 2009 at 8:35 am
Awesome article. Never heard of these theories.
boston2012 said...
on Dec. 15 2009 at 12:04 pm
Hey, good job. I like your other articles as well. The one about high school and sleep was the best, and everyone in my writing class is behind you on that one. This one is fascinating too.
marylandblue said...
on Dec. 15 2009 at 12:02 pm
Dude, I never knew anything about the gematria until now. I think I'll do a little research about this. It sounds very cool.