Two years ago, I, along with countless other Armenians, stood in front of Congressman Adam Schiff. As he walked onto the stage, the crowd immediately became silent, but we continued to keep our flags raised, the red, blue, and orange bands rustling against the wind. The congressman cried out, “Turkey, do you hear our voices? Do you hear our voices?”

Ever since I was a toddler, I have attended a protest on April 24 to commemorate and remember the Armenian Genocide. I chant, proudly hold my Armenian flag, and protest so the voice of my people can be heard, the voice that speaks for the 1.5 million Armenians killed by the Ottoman Empire from 1915-1917 (1).

According to the Armenian National Institute, thirty countries recognize the Armenian Genocide, including France, Greece, Italy, Lebanon, and as of April 24 of 2021, the United States (2). In a statement, President Biden said, “We affirm the history. We do this not to cast blame but to ensure that what happened is never repeated” (3). A country recognizes a genocide or atrocity not only when most citizens acknowledge the past event, but also when the government officials do, as Biden did for the Armenian genocide.

Armenian Prime Minister, Nikol Pashinyan, thanked President Biden for his “powerful step toward justice and invaluable support to the heirs of the Armenian genocide victims” (4). However, Turkey, the modern-day successor of the Ottoman Empire, continues to deny that the killings of Armenians were part of a plan to erase the Armenian population, and therefore, does not recognize the genocide.

For many, Biden’s recognition and acknowledgment, though a long time coming, plays an important part in the healing process, especially for those whose lives continue to be touched by the legacy of trauma. Araz Artinian, a resident in Los Angeles who attended a peaceful demonstration with her children said, “I’m happy that my children are witnessing the day. We worked very hard to see America recognize the Armenian genocide” (5).

American psychologist Daniel L. Schacter writes in his book, The Seven Sins of Memory: How the Mind Forgets and Remembers, “One of the most basic functions of many types of memory is that it helps us prepare for the future” (6). Acknowledging a past event not only allows us to face history but also ensures that the same atrocities will not be repeated.

Adolf Hitler, in preparation for and defense of the invasion of Poland, asked, “Who, after all, speaks today of the annihilation of the Armenians?” (7). Hitler justified his plan to destroy Poland with the Armenian Genocide. The failure to bring justice to Armenians led Hitler to believe that he would “not be held responsible for his own crimes against humanity,” explained Dr. Bardakjian, the writer of a report for the Zoryan Institute, a non-profit organization that promotes the recognition and education of the Armenian Genocide (8). Denying a genocide impacts other atrocities, and ultimately, can cause another genocide. It’s a sad state of history when one genocide is an excuse for another.

In 1937, during a period of six weeks, Imperial Japanese Army forces brutally murdered hundreds of thousands of people, including civilians, in Nanking (Nanjing), China. To this day, the Nanking Massacre is denied by many Japanese government officials, along with citizens, who aren’t taught much about Japan’s historical war crimes (9).

Both Israel and China teach young children about the atrocities and genocides committed against them. However, Japan, unlike Germany, has not prioritized student education about the past atrocities that their country has committed. After a horrific act is performed on a specific group of people, deep, painful wounds are left open. These wounds will never fully close, but through remembering and education, the wounds can start to heal.

Closer to home, debates about the content and coverage of American history in schools are often about the history of slavery. In 2018, the Southern Poverty Law Center, an anti-racist non-profit organization, surveyed high school students and History teachers. They found that 90% of teachers said that they were comfortable teaching slavery, but 58% explained that their textbooks were inadequate, and 40% stated that their states did not provide a great amount of support for teaching their history (10). “State standards we looked at are simply confused. We celebrate the heroes who escaped slavery long before we explain to children what slavery was,” said Maureen Costello, the director of Teaching Tolerance, a project under the Southern Poverty Law Center that is working towards reducing prejudice and supporting equitable school experiences for all students (11).

Indigenous land acknowledgment also demonstrates the power of recognition. In 1830, President Andrew Jackson signed the Indian Removal Act into law. The act gave President Jackson the authority to force Native American tribes to move from their land. Aside from the Indian Removal Act, other laws were put into place that took land away from indigenous people. “When we talk about land, land is part of who we are. It’s a mixture of our blood, our past, our current, and our future. We carry our ancestors in us, and they’re around us. As you all do,” said Mary Lyons of Leech Lake Band of Ojibwe (12). The United States has recognized its long and unfortunate history with indigenous land. This has not necessarily made the lives of Native Americans and indigenous people easier in the United States, but the simple act of acknowledging and remembering is extremely powerful.

As an Armenian, hearing President Biden state, “We remember the lives of all those who died in the Ottoman-era Armenian genocide and recommit ourselves to preventing such an atrocity from ever again occurring,” made me feel heard (13). More importantly, it made a large handful of Armenian Americans feel heard. Biden is the only United States president to acknowledge the Armenian Genocide, and this fills me with optimism for the future. I hope that one day Turkey will acknowledge the Armenian Genocide, the mass murder of my ancestors. I hope that everyone learns that acknowledging a past does not necessarily taint the future. Rather it sets us free to create a new and better one. I hope that our society stops forgetting because forgetting is not how issues get resolved. Forgetting is not how our world can finally close the gaps between different genders, races, and classes. It is only through learning, remembering, and acknowledging past atrocities that we can become a more humane and tolerant society. 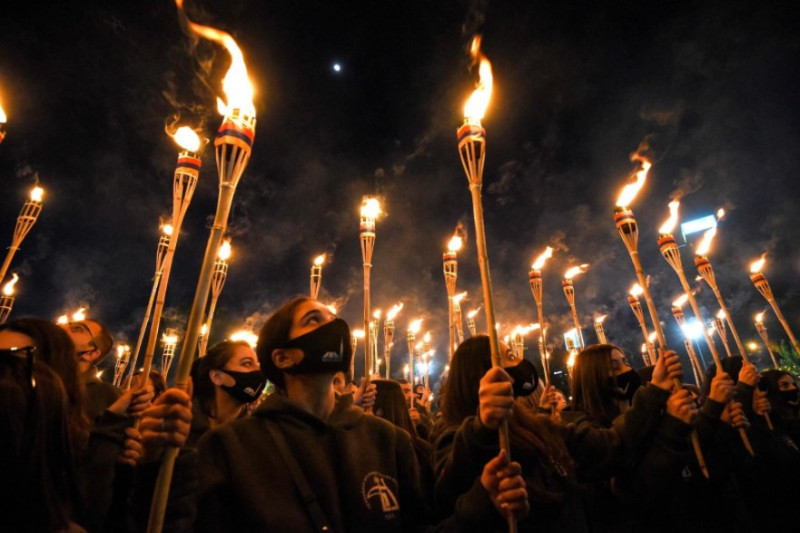