Earth Day is becoming a permanent event in America, for the mere thought of global warming has sent gullible civilians into a panic of eco-consciousness. Going “green” is budding into a national phenomenon, where clothing shops are bagging your organic t-shirts into biodegradable shopping bags. It’s where relaxing means lighting your soy wax candle and kicking back in your bamboo spa robe while drinking champagne out of your recycled glass flute. Al Gore’s dull documentary focuses on his crusade against global warming, spooking us with bar graphs and pie charts during the never-ending lecture that truly was “An Inconvenient Truth”. Maybe it was inconvenient for the polar bears, who already knew something was up, but it was not inconvenient to corporations with an insatiable appetite for money. They’re profiting off of the fear from American people, who frantically scurry around, searching for a purchasable solution to the problem they unknowingly created. Is global warming a marketing tactic or an actual life-threatening issue?

Before the first cries of climate change, people in America were living life peacefully, devoid of pesky thoughts that they were contributing to their own demise. Life was easy; gas was $1.50 a gallon and Three’s Company was still on television. All of a sudden in the early 2000s, new reports of global warming were accumulating and popping up on your local 5 o’clock news. “Artic ice melting at record rates” “Global warming killing endangered species” “Massive hurricanes linked to global warming”. Soon, respected news and trashy teen magazines alike, television advertising, shopping malls, and internet blogs worldwide were taking notice. A new wave of consumerism was created, feeding off guilt from earth’s residents who feel responsible for climate change. This new wave contains the over-used buzzword “green”. Green houseware, green electronics, green skin care, green blankets, green copying paper, and even green picture frames. All of which are made from glorious renewable resources. Stiff bamboo, fibrous hemp and dead wood.


Even the queen of television herself, Oprah Winfrey, is jumping on the green bandwagon. Winfrey conducted an entire show comprised of green lifestyle changes to commence the saving of our doomed planet Earth. Using the catch phrase “Simple Changes, Big Results”, she genially commands you to go out and acquire her list of Favorite Green Things. Simple proposals like not using toilet paper, abstaining from air conditioning, and walking to the market are actions that will evidently single-handedly revive the Earth.

Whether in the realization stage or still comfortably stuck in denial of the existence of global warming a.k.a climate change, soon all varieties of people will begin to flock more towards eco-friendly products. The popularity of such products may be a trendy phase, such as the Rubik’s Cube or lava lamps, but will it soon warp from being a charitable purchase, to fashionable conformance? Sadly, yes. But good ol’ Mother Nature isn’t complaining one bit. 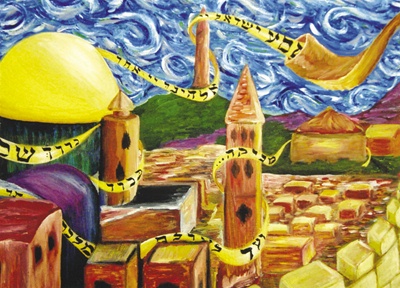 I agree that companies are taking advantage of people's fear over global warming to help endorse their products. I think that people should get more informed about the REAL global warming before they go and make drastic decisions. Alot of the global warming crisis seems like mostly hype and confusion.

Although I do think that global warming is real, I don't think that it's going to affect us in the near future and I think that there's really no way to completly stop it. It's a natural process that's been going on for hundreds of years, if not thousands.

View profile
I think climate change is definitely a real threat...more than we can even know yet. It's probably better to be more aware than less.
IsobelFree DIAMOND said...
on May. 2 2010 at 1:31 pm
IsobelFree DIAMOND, Hamilton, Other
71 articles 20 photos 296 comments

View profile
I agree, but I doubt global warming's a marketing tactic. Sure, companies are taking advantage of the new ecoconsciousness, but companies will always do that to any situation. And isn't it better that they are at least making an effort to preserve the planet? Being eco-friendly can't be bad.
swim4ever SILVER said...
on Feb. 7 2010 at 7:38 am
swim4ever SILVER, Carol Stream, Illinois
9 articles 0 photos 60 comments

View profile
I loved the article and it really made me think. on another point we know that are supply of Fosil Fuel and some of those products are reducing the amount of fossil fuel that has to be used so we can save it for more important things like cars. I also thought the part about oprah really could of been left out it was really distracting to the article. last but not least I loved this article I really loved the question you asked in the last line of the first paragrahph. Great JOB
basketballchic11 said...
on Dec. 13 2009 at 2:39 pm
yeah a lot of people buy organic stuff now and sometimes I too think it's not to save the earth or anything but just to fit in with the crowd. the only thing that idk is if it's all the products are legit eco-friendly
wait...what?! said...
on Sep. 23 2009 at 5:05 pm
so if it was trendy and profitable to corp.'s to save a bus full of orphans or to cure cancer should we not do just for the fact that its trendy and profitable? Every little bit helps. People need to stop nit picking and suck it up. I do agree. A LOT of people "go green" just to save face. Why not just let them?
Drew Leatham BRONZE said...
on May. 27 2009 at 1:41 am
Drew Leatham BRONZE, Chadler, Arizona
3 articles 0 photos 2 comments
View profile
Sarah, well said.

In honestly seems that "Green" is the new "Black", and people are just jumping on the bandwagon.

I do know that "Climate-Change" is a real threat, but I would contest that it is not near so drastic a problem as the media has portrayed it. Awareness groups started out small, and with honorable intentions. But then-preying on fear-corporations and public juggernauts like Al Gore immediately volleyed "truthful" statistics that drove most of the general populace to quake in their boots.

Driven by their examples, and seeing an insurmountable opportunity for a quick dollar, CEO's and Celebrities alike took advantage of the situation and have now created a continually growing "Green-Wagon".

And while I do agree that Mother Nature isn't complaining one bit, I am also disappointed that the new "green-volution" couldn't have been for more honorable reasons.

Nonetheless, I hope it turns out for the best.

- Drew
awesomeaugust said...
on May. 26 2009 at 10:31 pm
nice job. I was a little confused at first, but I liked some of your later points. I myself have become a little tired of seeing "green"
artofthedeath PLATINUM said...
on May. 26 2009 at 11:53 am
artofthedeath PLATINUM, Dothan, Alabama
23 articles 0 photos 16 comments
View profile
I understand completely. I mean, the market will feed off of anything, regardless what it is.

I liked your information and your writing style. Very informative.
Dsquare said...
on Dec. 30 2008 at 10:19 pm
I'm not really sure what you're trying to say. You're right that it is getting trendy to be green. But, isn't awareness and doing what you can a step in the right direction. Or, it is better to stick with the status quo?

Also, I'm not sure what the comment about Mother Nature not complaining one bit means. There is no question that Mother Nature will survive whatever we humans do to her. The question is how many humans and animals will suffer and die needlessly from all manner of ecological catastrophes?
Sakii <3 said...
on Dec. 17 2008 at 10:01 pm
Very funny, but you present an important point all the same. You writing brings out the truth through laughter. Its true, people aren't as aware of their environment as their lives lead them to believe.
jillybill said...
on Sep. 27 2008 at 12:36 am
oh this is hillarious. great work. i could soo see this in like TIME or Newsweek or something
armandhammer said...
on Sep. 21 2008 at 6:35 pm
Hey, great work here. Going green does really seem just to be a trend rather than an actual statemement.
kymba33 said...
on Sep. 18 2008 at 1:26 am
GREAT ARTICLE!!!! YOU HAVE ALOT OF REALLLLY GREAT POINTS!!! LOVE THEM!!! WELL WRITTEN!!! KEEP WORKING HARD!!!!
Kobie98 said...
on Sep. 17 2008 at 1:07 pm
Excellent article; really empahsizes the importance of going greeen and it's okay to "Go Green", it's now the "in" thing!! Good article by a well informed individual.
isupportu said...
on Sep. 16 2008 at 3:51 am
WOW you are amazing!!!!
hiljay92 said...
on Sep. 16 2008 at 3:49 am
Lol..this girl is a great writer. I completely agree with the whole green thing.
Rose_of_the_arctic said...
on Sep. 16 2008 at 2:05 am
I thought this was very well written. And you make an excellent point. 'Going green' reminds me of the previous consumer trend 'made in America.' It's sad to see people only care about the environment, if they can make a quick buck. Keep up the good work!