Meteorite Lake is fringed by majestic, choppy mountains and topped by an endlessly rich azure blue sky. The seamless expanse is fragmented only by puffs of clouds. They rest on the layers of air, completely flat-bottomed. Standing below, one might think the colossal puffs weigh a thousand pounds each and are magically suspended far above the ground by gauzy, invisible strings connected to the stars. They climb and change with the varying weather, and drift across the scene as the wind gently ushers them along, in a way similar to how a mother duck nudges her ducklings athwart the pond. Now the clouds are dazzlingly white through and through, reflecting the brilliant rays of the sun onto the land. However, in the blink of an eye, the winds can change, and cast a grayish hue against the sky, pelting the earth with rain and snow. Miles higher, above the cauliflower-white mists, the sky is smeared with thin, icy sheets of cirrostratus clouds. They catch the light like sand blown in the wind and block out the warm rays that make their way to the hungry foliage below. While the air aloft is frosty and swiftly moving in lengthy jet streams, where life is found, the crisp breeze pleasantly stirs the scent of nature and the feeling of thorough calm.
The Mountains
Reaching nearly as high as the remarkable world of clouds, grandiose mountains puncture the dome of the sky. They envelope the stagnant water, gradually rising higher and higher before topping out at heights so towering that it hurts one’s neck to look up so far. Near the very tip of the lofty peak, a sifting of snow offers a stark contrast to the coal darkness of the rocks still too cold for life to subsist on. From a distance, the powdery drifts look velvety and trim, but up close, the ground is marked and scared, rough and treacherous to hike. The air is thin, and the steep cliffs are not often seen by fragile humans. Below the snowline, the mountains are carpeted by a mass of aged pines and mature evergreen trees. They’ve grown in the same spot for many years, each telling its own story of witnessing the expansion of the lake below, the harshest winters, and the first flights of young birds. Here, the air is tainted softly by the sharp scent of woods and fresh snow, winter and wild tangles of undergrowth. From the surface of the water, the forests blur into a single covering of fresh, hunter green, giving the mountains an almost delicate, muted texture. Unseen from the ground, multitudes of furry creatures and hearty plants call this place home. They patter about pursuing their next meal or a warm place to rest. The moss and ferns conceal their winding trails and the undomesticated wilderness continues as always. For the most part, these mountains are deafeningly silent, until interrupted by a call or peck. 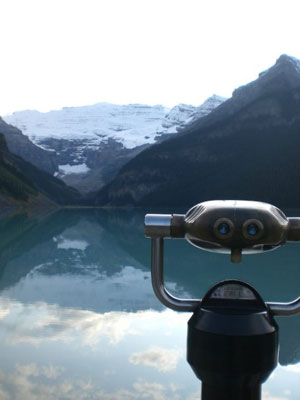