A Millisecond Off | Teen Ink

Favorite Quote:
"No you've got, yes, you can get

Standing in the huge swimming hall, Julia looks around, and sees the other contestants lined up along the pool. Next to her, a girl in a black swimming suit smiles at her. She is one of the fastest contestants, Julia knows.

In front of her, starting block number 5 shines in the sunlight. The water is waving slightly, waves that go on and on, never stopping. It’s satisfying to watch. Julia looks away, and tries to concentrate.  She looks at her Slovak coach, who nods at her, wishing her success.

Julia focuses back on the 25 meter pool, and gets ready for the whistle. That’s when she’ll have to get ready to start.


“Vreeeeeeeeeeeeeeeeeeeeew!” The whistle blows and Julia steps on block number 5.
She empties her mind, ignoring all the sounds around her.
“Get ready…”  “BEEEEP!!”

A high pitched shrill fills the hall, and all the swimmers jump. The water splashes and the rhythm of the waves is broken. Crawling through the water, Julia makes up for her late jump. In a killing pace, she slowly passes the other contestants. Five meters before the turning point, she is swimming fourth.

She gets ready for the turn. She tightens her leg muscles, and flips around, putting her feet on the wall. Like a frog she pushes herself away from the wall, doing it with so much power, that she becomes 2nd right away. In front of her Natasha, the girl with the black swimsuit, is getting tired and losing a bit of speed.


Julia turns into a machine, breaking the water with top speed, catching up with Natasha.
FASTEEERRRRR! her mind says.
Next to her, Natasha’s powerful rhythm finally breaks, and Julia is able to pass her by just a bit. She raises her hand up, and smashes it down on the sensor,
“BEEEEEP!” milliseconds before Natasha.
Out of breath, but with a smile on her face, she listens to the commentator.
“AND THE WINNER, OF THE 50 METER FINALS…” His voice flowing through the hall…
“IS… NATASHA G.!!!”


Julia, her mind completely blown, climbs out of the pool. She takes a towel, and wrapping it around her, she walks to the TIS bench. “I was first!” she exclaims, with a mix of anger and astonishment. All the other TIS people believe her, but they were too far away to see it themselves. Still out of breath, Julia looks at the pool. Time for the ceremony.

Through the big speakers, all the contestants are called to the ceremony platform. Julia walks towards it.

She sits down and looks for Natasha. There she is, two rows in front of her, being congratulated by her friends. With a face of hidden anger she waits, as the director of the school steps on the platform.

“As you all know, the finals of the 50 meters have just finished, and I am happy to announce that it was a great race. I think….”

He goes on talking for another three minutes, until he comes to the point where he calls the winners to the stage.

“I would like an applause, for first place winner, Natasha G.!” and he hangs the medal around her neck. “Second place…. Julia Schneider!” and Julia walks over to him, getting her silver medal. This one was supposed to be for Natasha, she thinks irritated, but decides to hide her anger with a laugh. “Third place goes to…” but suddenly a woman hurries up the stage. She whispers something in the director’s ear, and Julia watches him nodding.

The woman leaves, and the director speaks again. “Due to a technical glitch in the computers, Julia Schneider’s sensor did not react at once, which has caused Natasha to win. I am sorry to announce, that Julia is the actual winner of the 50 meter race!”

Another shout rises from the benches, but his time from Tirana International School. The director takes the gold medal from Natasha’s neck, and gives it to Julia. Julia looks at Natasha, and suddenly feels bad. She walks over to her and gives her the silver medal, laughing at her nicely and full of pity. Natasha laughs back, but with a bit of a sad face. Julia walks away to the other TIS swimmers, who congratulate her immediately. She just can’t believe she actually won!

New energy flows through her body, and she is more than ready for the next race. 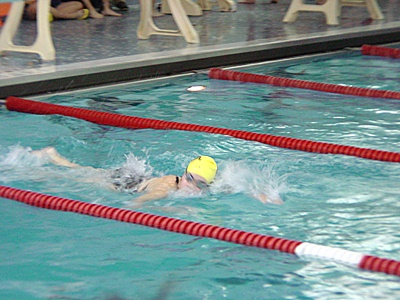 In class, we had to write about another student's adventure

View profile
helo my name is dongerino pasterino ヽ༼ຈل͜ຈ༽ﾉ, i am 69 year old donger from imaqtmeatloaf’s stream . 420 years ago i was kidnapped and put into a donger concentration camp for 9001 years. 1 year ago, imaqtlasagne and imaqtpie invaded the camp and rescued me. now i work as teacherino, passing down the wisdom of ( ͡° ͜ʖ ͡°) to young dongers.
Julianna.S GOLD said...
on Nov. 15 2017 at 2:55 am
Julianna.S GOLD, Tirana, Other
17 articles 0 photos 28 comments
View profile
I love the climax it really conveys the emotions the main character felt while swimming. ;)