The kid who sat next to me, for three years, was named Jon. We both played clarinet in band and we were both told that we had a lot of raw talent. Which means, when we were assigned seats, we sat next to each other still. When we would take playing tests to see how well we could play, we would only be a half point apart. That is astounding, and really down to the wire (playing tests count how many mistakes you make, a half point per mistake.) We would play the same part, and I treated him more like a co-first chair than a second chair (first chair is the best player in the section, in this case, clarinet).

We would play off each other, when we would play a concert with the seventh graders, and I didn’t sit next to him, my music felt off. When I had a question about a note, I would ask him, because chances are that one of us knew.

That was eighth grade year. Now, as a freshman, he is not here. Jon decided not to play in band freshman year. I have lost my Jon.

I am still playing in band, and my raw talent has been somewhat defined. But, now my music feels off, somehow. Jon knew me, he knew what I was going to ask him before I did and we could share a story, question ,or joke with just a glance.

I was wondering why it did earlier. Could losing Jon really affect my music and playing ability that much? Yes, it could, I decided. He is taking different classes than me this year, so I won’t really see him that much. It’s very discouraging.

While reflecting on that, I realized that I had two choices. 1) I could find a replacement Jon, or 2) I could become better by learning to move on. I choose the second.

It is not the end of the world.

There. Surprised? Shouldn’t be. This is the dramatic conclusion that I came to. A change, like losing your Jon, can spin your world out of proportion. It can send you to the ground. But the most important thing to remember, is that you can recover. Be strong, and overcome. 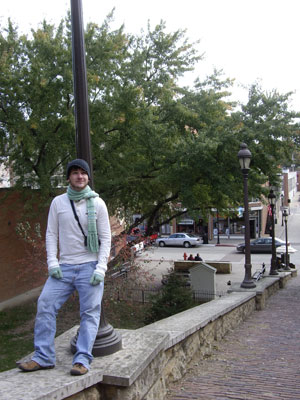