This is the story of a time I went to my dad for help because he seemed to be the only person who believed in me.

My friend Brett had just gotten a dirt bike and a lot of other kids in my neighborhood knew how to ride. I wanted to also, but I didn’t even know the difference between the clutch and the front brake. All the guys told me I couldn’t do it because I was a girl. I was determined to prove them wrong, so Brett let me try his bike. I wasn’t on for one minute before I fell off. He came over to see if I were okay, but then started laughing. I felt like running somewhere I wouldn’t be laughed at, but slowly my confidence returned and I got back on the bike. As soon as it started to move, I got nervous and once again lost my nerve.

That night I told my dad the whole story about how I wanted to be as good as the guys and how I had embarrassed myself. He asked how much I really wanted to learn and I told him I had wanted to ride for a year, that it was everything I dreamed about.

A few days later my dad told me he’d found a nice bike for a reasonable price. He brought it home and that was when I became the laughing stock of the neighborhood. All the guys thought it was a joke that I actually wanted to learn how to ride and I became known as a wannabe.

We took it one step at a time. My dad spent four long weeks teaching me everything I needed to know about the bike and the basics of riding. No one truly believed I could learn to ride except my dad. Day after day and night after night he worked with me, and I began to progress. I was so thankful. It meant so much that he would take time from his busy schedule to help me fulfill this dream.

Each ride on my dirt bike, I got a little better, and finally I was ready for my first time on the trails. At first I couldn’t keep up and the boys had to wait for me. My bike constantly stalled and got stuck in the muddy creeks.

Every time I came back, I would cry because I was so teased, and every time I cried my dad was there to put his arms around me. He would tell me not to listen to them and that with more practice, I would be as good, or better, than them. The very next day I would get back on my bike and he would coach me through the problem I was having.

Things eventually got easier, as if I could ride with my eyes closed. Every time I rode on the trails I got a little better and the guys didn’t have to wait for me. I still am made fun of, not because I’m an amateur or not good, but instead because they felt threatened that a girl can do what they did.

I cannot even remember how many nights I spent crying when I had lost my confidence because of those boys. Every time I needed a shoulder to cry on, my dad was there. He never let me give up and always had faith in me, even if I couldn’t do something right.

My dad was a huge help that summer and taught me so much that will stay with me for the rest of my life, including that I shouldn’t let others put me down. I also learned that I can do anything with enough determination and practice, but I never would have achieved my dream of learning how to ride a dirt bike without my dad. 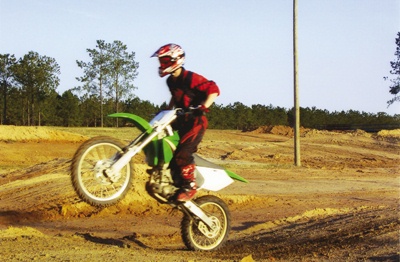 Favorite Quote:
life is never what we see, but what we cant see, overturned by reality..quote from me

View profile
Nice! You're a great worker! Keep it up!