Favorite Quote:
how do i get out of this labyrinth?

When I was in third grade, I was a very environmentally conscious person. You would not only see me recycling, but me trying to get other people to recycle. I used to stuff my pockets with other kids paper that they would otherwise have thrown away. When the pockets of my sweater started to ware down, I started bringing bags. Teachers would see me walking down the hall with three full bags of leftovers from our latest craft. They’d smile and chuckle. As if they were about to pat me on the head they would say, “Our little recycle girl.”

I don’t like people talking down to me. So you can tell that I hated the name, recycle girl. “Aw. Wook at the wittle child twying to save the world. Isn’t she just adowable?” I imagined them saying in the teacher’s lounge, which made me even angrier. On Monday, I was ready. I knew I was going to get respect. On Monday, the crowds would shriek at the sheer awesomeness of the box.

The box was a large cardboard rectangular prism that used to hold a filing cabinet. I decorated it with crayons and attached some straps to it so I could haul it to the car as my mom took it to recycling center. Every Friday, I would carry the recycling box on my back. It was excruciatingly heavy, but I continued to walk through the hallways in line with my classmates. I didn’t dare look at the other kids because I knew that they thought I was crazy. Maybe I was, but at least I was doing something.

Later that year, an adult told me that I was just going through a phase. I don’t know what was more insulting, the adult telling me that, or the fact that she was right. The next year I stopped and became extremely religious, a phase, which also only lasted a year. Of all of my phases this is my favorite, although I feel ashamed that it ended.

I think the biggest thing that made my recycling phase come to a close was that I wasn’t getting through to anyone. No one cared if some eight-year-old girl wanted to save the planet. It was just a game to the people around me. When I was still using bags, I was taking a test and a boy got up to throw his paper away. I told him he could just put the paper in the bag, but he said he wanted to “slam dunk” the ball into the trashcan. He said the trashcan specifically. When he did that I got up and fished the piece of paper out of the can. I put it in my bag of recyclables, went back to my seat and finished my test. I didn’t say another word. Everyone stared at me like I was the creature from the black lagoon, but at that point in time, I didn’t care. 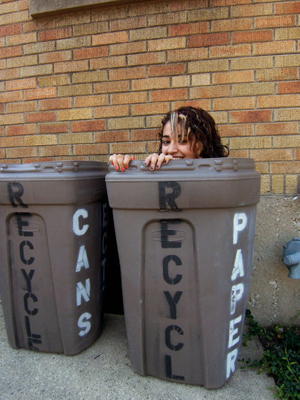