The Childhood Belief That Lived

I was in second grade when I discovered the magical world of Harry Potter,
I dreamed about living in the spectacular world of witches, wizards, elves and dragons.
My best friend Jake and I truly believed that we would receive our letters; cordially inviting us to attend Hogwarts School of witchcraft and wizardry. Many hair-brained schemes were concocted to “practice” our non-existent “magical powers”. The concept that amazed us the most was flying; neither of us dreamed of being soccer or basketball stars, we wanted to play quiddich. That ridiculous belief led to one of the most unbelievable childhood schemes ever planned.


It was a warm Boston summer afternoon and I had just finished reading Harry Potter and the Chamber of Secrets. I was once again amazed by the intricately woven thread of the magical world. I truly believed that a world like that existed and I desperately wanted to be a part of it. I was blind to the fact that it was all a fantasy; Jake and I had tried many times to recreate scenes from the books. Including, a close attempt with a potion; which we tried to ingest. We were saved a trip to the poison control by his older sister. I was off to his house to discuss the latest book. On the short walk, my head was swimming with images of us flying around on brooms over the neighborhood watching the landscape.


I was greeted by my hyper best friend, who was mentally unstable due to a Harry Potter overdose. “Did you finish it!?!” He questioned. “Of course I did” I replied.
“I loved all the quiddich scenes!” He exclaimed. I enthuasticly nodded and impatiently gestured to his backyard. After an hour of animated discussion, the excitement of a freshly read book had worn off and we were extremely bored. Thus another scheme was born!

Our brilliant plan was to stand on top of his swing set, decked in our beloved Harry Potter Halloween costumes with our trusty brooms in tow; then, we were going to plunge into the air and take “flight”. Confident that our plan would work we gave his five year old brother three dollars to document the momentous occasion with a picture.
In worn costumes we trekked up to the top, clutching our cumbersome brooms as we prepared to plunge. The flash was blinding as the little blonde boy beneath us clicked away with his camera. When the flashes had subsided, we each took a deep breath and plunged off the thin bar of wood.


For three glorious seconds we glided thorough the air before dropping six feet to the hard ground below. The last thing I saw before we crashed was the final click of the camera. The next thing I knew, I had a sharp pain going through my left arm and I could hear the commotion around me. I could hear shrieks about how much blood Jake was covered in and the strange angle my arm was positioned in. I opened my eyes and was horrified to see the scene unfolding in front of me. We were both pretty battered up from what I could see, Jake has a broken nose and my arm was badly twisted. Quickly, we were whisked off to the emergency room.


A few stitches later, we were both home and no worse for the wear. I had a broken arm, a dislocated shoulder and two stitches near my eye and he had a badly broken nose and a broken leg. Surprisingly, this disaster did not turn us off from Harry Potter; if anything it made the obsession worse. Of course this did bring a devastating dose of reality, proving that our acceptance letters was never coming. To us, this was equivalent to the heartbreak of learning the truth about Santa Clause or The Tooth Fairy. But, deep-down I never gave up hope, there was always that little part of me that believed my letter would come.


It is still a heated debate over whose idiotic scheme it was; if you ask, we will blame each other. But even though the outcome of the event was disastrous, it proved how invincible childhood beliefs are. We were both given blatant proof that Harry Potter wasn’t real, but we still believed in magic for another four years and even though my belief in magic has slowly faded away I always have those fond and often discussed memories of warm summer days playing Harry Potter. 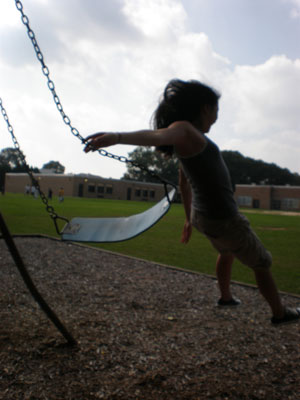 The author's comments:
Nothing can penetrate childhood belief...not even the truth.
Post a comment
Submit your own

Favorite Quote:
"Love is a many splendored thing, Love lifts us up where we belong, All you need is love!"

Favorite Quote:
"No man is so good that were he to submit all his thoughts and actions to the law would not deserve hanging ten times over"