Carl Lewis has been a member of five Olympic teams, including the 1980 Games, but it wasn’t until the 1984 Games in Los Angeles that he came into his own, winning the 100-M, 200-M, long jump, and 4 x lOO-M relay. He continued to create history at the 1988 Games in Seoul, where he won the 100-M and the long jump for a second time. In 1992 in Barcelona, Carl won the long jump and 4 x lOO-M relay again. Carl Lewis, the legend, finally finished competing in 1996 in Atlanta where, surprise, surprise, he won the long jump.

He happens to live right down the street from me, so after watching the Athens 2004 Olympics I decided to seize the moment and knock on the door of the greatest Olympian of all time.

I probably looked ridiculous: a complete stranger in a gray-pleated skirt and school sweatshirt with my name slapped across the front, randomly knocking on Carl Lewis’ door with note cards and camera in hand. I thought for sure he would send me packing and laugh at the fact that I actually expected to interview him. Not only did he agree to the interview, though, he seemed genuinely excited and treated me like a big-time reporter as he thoughtfully answered each question.

When did you start track and field? What got you started?

I started when I was eight. My mother was a teacher and a’60s feminist, so she wanted to start a track club for girls in my school, and since I was surrounded by it, I took up running. However, my parents had me in all sorts of sports.

When you started running, did you realize that you were going to be great?

No! I was awful when I started! I was 5'5" until the end of tenth grade, but by the time I graduated I was six feet. It was thanks to my parents that I actually stuck with running. I’m sure I would have quit if it hadn’t been for them telling me not to give up.

Who were your main influences growing up?

My parents, definitely. They were both teachers, so they taught me discipline, and were always there to support me. My family was and is very close.

Jesse Owens is another influence, too. Not only did I look up to him athletically, but also it was because of him that I developed a love for history and politics.

What was your motivation to work so hard and endure such grueling practices?

Since I had been such a terrible runner as a kid, always finishing behind the pack, I felt blessed when success began to come my way. I loved that I wasn’t coming in last!So, I guess my motivation was to stay at the front, because I knew too well what it was like coming in last.

What was your proudest moment?

When my father passed away in 1987 he told me two things: first, that I should never miss a track meet, no matter what; second, that he was proud of me. That meant everything to me because my parents had sacrificed so much for my running, and me, and to know that he was proud of my accomplishments made me proud. I actually buried one of my gold medals with him.

Is there a particular race where you really came into your own as an athlete?

No, that’s easy compared to the long jump. The 100-M gets all the attention because everyone in the world has raced someone else, and so in that sense the 100-M is the ultimate race because it determines who is the fastest in the world.

But it’s in the long jump that you have to run 60 yards to land on an eight-inch board, and then go on to jump with your body leaning forward, all while the wind is in your favor one second, and not the next.

Was it overwhelming after your first Olympics to come home and be a huge star?

Yes! It was kind of like the hype around Michael Phelps this last Olympics. From that first January back home, and then for nine straight months, I was on the cover of national magazines: Time, Newsweek, GQ, Sports Illustrated, every week. [Carl was the first person to be on the cover of Time two consecutive weeks. ]

You’re a legend. Are you ever worried that someone will come along and snatch your titles?

No. My time has passed, but you can’t take away what I did. It’s like being valedictorian, someone will come along the following year and take that title from you, but that doesn’t change the fact that you were the valedictorian of your year.

I’d actually like to see someone do what I did, because looking back at it, I had no clue what I was doing. After my first Olympics I was just 23, and it’s only now, at 43, that I’m beginning to comprehend everything Idid.

Do you actually watch the Olympics? Attend them?

Yes, Sydney was the first Olympics that I attended as a spectator, and Athens. In Athens, though, I didn’t watch much track and field because I wanted to see sports I’d never watched before. I loved table tennis, and men’s volleyball. You wouldn’t believe it, those guys are taller than NBA players! But what I like more than seeing the sports is seeing the different cultures within the sports. Each sport has its own world; each one has its own legends.

What did you think of the 2004 Olympics in Athens?

What do you consider your greatest achievement?

Longevity. Period. My career started in ’79 and ended with an Olympic gold in ’96. Also, consistency. Throughout my entire track and field career I stuck with one coach, one manager, one club.

You ended with an Olympic gold. Did you do that because you wanted to go out with a bang?

No, I wanted to go out on my own terms. It was bizarre, though, because once I stepped down off that podium with my medal, I had no desire to compete. It was strange.

What are some characteristics of an Olympian?

Determination, being focused, and being able to get along with people. Even in running, which is considered an individual sport, it’s important to get along with others because you have to like and respect your coach - that’s key.

What thoughts went through your mind before a race? What did you tell yourself? Did you have any good-luck charms?

Leading up to the race, I’d go over my race technique, but once I stepped into the block, I would try to relax and clear my mind so the only thing I could hear was the gun going off.

While I was actually running, I had to be aware of what was happening, but I couldn’t let that affect my race. I had to run my own race.

As far as good luck charms, I didn’t really have any, but I did wear a new pair of shoes every race. I went through lots of shoes!

What are your current projects? Do you still run?

I moved to L. A. in ’99 to pursue acting, and I’ve been in three films, with one opening this year, “Tournament of Dreams. ” I’m also in the process of developing a TV series. And I do still run, especially with my dogs, and I exercise in general because I like staying active.

What advice would you give athletes? 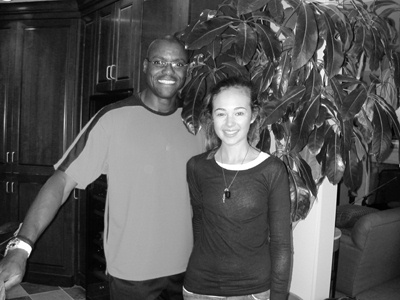 Favorite Quote:
"With God all things are possible" Matthew 19:26

View profile
Great interview. It's great to hear about such a succsessful person. Thank you.
Ephisins said...
on Jul. 18 2009 at 12:55 pm
thanks alot send more of intrviews from successful personalalities.