Caroline Kennedy, daughter of President John F. Kennedy, is an attorney, editor, and writer. She is also one of the founders of the annual Profiles in Courage Award, given to elected officials who take a courageous risk, sometimes against the wishes of their constituents. She has written several books, is the president of the Kennedy Library Foundation in Boston, and the director of both the NAACP Legal Defense and Educational Fund and of the Commission on Presidential Debates.

Bridget: Teen Ink encourages teenagers to take risks through their poetry, stories, and art. What relationship do you think the arts has to finding and developing personal courage?

Well, I think that courage is really something that comes from within, and that’s certainly one of the sections of Profiles in Courage where people really find a lot of meaning and resonance. I think the arts help us find our voice and connect with who we are at the deepest level. So, the better you know yourself, the more courageous you can be.

Dorry: You’ve had a great deal of exposure with the media and you’ve done a great job not getting involved with all of its negative aspects. How can young people educate themselves about what media reports are real or what are just allegations or rumors?

Bridget: In Profiles in Courage, your father describes the pressures faced by senators. One of these pressures is the pressure to be liked. I think that this is the primary pressure felt by teens. How would you encourage young people to fight the need to conform and follow their own course?

The better you know yourself, the more able you are to chart your own path. And I think you can do that by reading, by helping others, and by finding out what’s important to you. It may be something that other people enjoy doing with you, but it also may be spending time on your own. So, whether it’s listening to music, or cooking, community service, or reading, there are lots of different ways to explore your interests. People have to trust themselves, and I think you’ll find your path that way.

Dorry: Teen Ink receives and publishes a great deal of poetry and I know you’ve edited a book of your mother’s favorite poetry. Also, in an interview with US Weekly, you said, “Poetry can start a conversation and bring people together.” Do you think it’s important for teens to be able to communicate through poetry? And how would you encourage them to do so?

I know teens do have a lot to say. I think writing is an important tool and is something you’ll need your whole life, no matter what you choose to do. Poetry is one way to express yourself that connects to the emotions a lot of us feel. Certainly when you’re trying to decide where you’re going to go to college and what you want to do, these are times that writing helps focus on the important questions in life, and poetry does that too. I think adults often are afraid of poetry, so it’s better to start when you’re young.

Dorry: I’m curious, who is your favorite poet?

Well, it depends. I have a lot of favorites. I did a book of poetry for young children and now I’m going to do one for older children. But I find there’s a lot of poetry in music and the spoken word, which is a movement that wasn’t around when I was a kid.

Dorry: This question is for Maia [teen winner of the Profiles in Courage Essay Contest. For her essay, see page 16]. What single aspect of the Shirley Chisholm story do you think is most relevant to teens today?

She was from an urban neighborhood, so she was constantly focusing on education, which obviously I think affects teens the most. She was just trying to give people a chance to educate themselves so they could grow up to be like her and help other people. I think that’s the most important thing that she did.

Bridget: Ms. Kennedy, what made you decide to involve high school students in the Profile in Courage Awards process?

My father really enjoyed writing, and writing Profiles in Courage, and I think it was fundamental to his career and his success. He was also a great reader, so I think we want young people to express themselves and participate in public affairs and public issues.

The essay contest is our way to try and reach out and get people involved. Hopefully Maia and other winners, and anyone who submits [an essay], will think about these issues as they go about their daily lives. When they see what’s happening in their communities, they’ll get an idea as to what they can do, or how to help someone who’s doing something courageous. So it’s about spreading the word at all levels.

I believe that things aren’t going to change unless teens make them change. You are at the age where you have the power to start to transform this country. It’s really important to come into that with background, knowledge, and a sense of the difficulties people faced in the past. That’s the idea behind it.

Dorry: What is the single quality you feel most distinguishes a candidate for the Profile in Courage Award?

Courage, of course. There are all kinds of courage and I think that’s one of the things we’ve seen as you read about the different winners. It takes a lot of courage to compromise with others and trust them and reach across a disagreement you might have, or a philosophical difference. For women or people of color, it takes a lot of courage to get involved in politics when it’s something that perhaps hasn’t been a part of your family or community. For each of us, there are many obstacles and I think that when you read about what these people have done, it really helps us think, “How can I be courageous in my own life? What’s

going on at my school? How can I help to make a change?”

Bridget: Your father once said that he wanted to restore a belief in politics as a noble profession and a calling to public service. How do you think more teenagers could get involved in politics today?

Volunteering on a campaign is a great way and this is the time to do it. It’s wide open, with many campaigns going on. It’s a lot of fun, but I’m not really the person to ask. You should be asking each other. It is fun to do campaigning with friends, so I think that’s really one of the best ways and it’s available now.

Bridget: A lot of teenagers equate success with money. What does success mean to you?

As you grow up, different things become important at different times. And so, as a teenager, being successful is trying to figure out who you are, and what you want to do, and obviously trying to do your best. Help the people around you. Those goals are probably true throughout your life as well.

Dorry: I was wondering what one or two books do you think every teenager should read before graduation?

Dorry: I love Madeleine Albright’s book, The Mighty and the Almighty. It’s wonderful.

Bridget: I read Charms for the Easy Life recently. It’s by Kay Gibbons, who is quickly becoming my favorite author. The book is about three generations of women who live together and their independence with each other. It’s set around World War II, so it’s really interesting.

Dorry: Most teens turn to their friends for everyday issues, but for the really important decisions, we seem to turn to our parents. What’s the best advice you ever received from your mother?

Well, I think I was really lucky because I had my mother, my grandmothers, all of whom were very strong, thoughtful, loving people, and so I don’t think it was one thing. I really think it was the example they set, rather than one talk. It’s a pattern of behavior and an approach to life and curiosity about the world that I admired in them, and really, a love of learning. I think those are some of the qualities that they passed on.

Dorry: Is there anything else that you think we should have included?

No, I think you guys did a pretty fantastic job. Good luck with everything 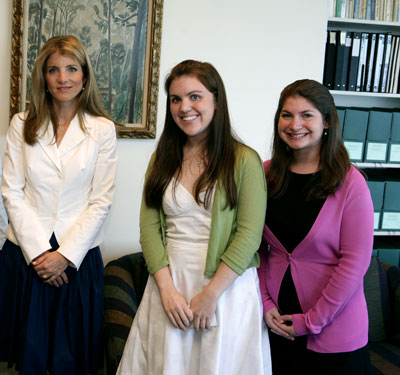 Favorite Quote:
"I failed my way to success." Thomas Edison
"What kind of crazy nut would spend two or three hours a day just running?" Pre
"A ship in harbor is safe, but that's not what ships are built for." John Shedd