Wedrove out to the corner of creation
where your mother wasborn.
Standing about, the rest of us were attacked
by insects andsunshine
but you by memories.
Between a pile of rusting batteriesand the carcass
of an ancient Ford you stop to look up.
There's astory, you say, that when you were five
I have not seen mygrandmother
in years, but I know you still visit her
still walk down thehalls that stink of age
and inevitability, to hold the shriveled glove
ofher hand and look into eyes
that do not know you. The other night
wewatched baseball, cheering for the Anaheim Angels
in their first-ever WorldSeries. You told me
about the first time your mother forgot who youwere.
You were trying to put her to bed when she
demanded, Where'sJohnny?
I'm Johnny, you promised her, and she would not
believe. Finallyyou said, Well, you know Johnny, he's a teenager:
He's out wandering aroundwith his friends. You go to sleep
and I'll go look for him.
Satisfied, shewent to bed and you
returned home to us, weighted down by the promise
thatyou had made to go in search of yourself.
When I was little you were myworld, tickling
teasing and wrestling me
across the floor so that my motherwinced and warned
you not to play too roughly or tease too painfully.
Youknocked me over and said, Don't worry, Honey,
I'm building hercharacter.
When I was younger I never wondered how
you felt or where youwere going and where
you have been. You would toss me in the air
pretend todrop me but never fail to catch.
I notice the years scurrying by, excited andguilty I see
how they pull you down and push
me up, though some things donot change.
You stand behind me with ready eyes and arms
I do not oftenlook back because I know
you are there, ready as always to give me
anone-too-gentle push
in the direction we are still fighting over.
When I dolook back, grateful for my momentum, I see
my father, patient and pleased,both of us knowing
that someday it will be me
catching you. 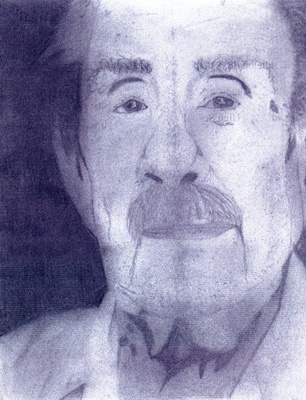