Not many realize that in their early childhood, they often learn lessons that are critical to their future. I experienced something at the age of four that I've never forgotten. For me, it was a journey of realization. When most look back at their childhoods, they draw memories of themselves that are ... well ... not as virtuous as they would like them to be. One memory particularly stands out and, though it's what any four-year-old would do in similar circumstances, it is what I learned from the experience that makes it special.

I opened my eyes to the golden rays of the sun on my first day at Buttons & Bows preschool. As a four-year-old American girl living in England, I was ecstatic. I carefully crept out of bed to listen at my parents' door. The carpet tickled my feet, and it was so cold I was shivering. Not a sound escaped their room. The sun was up, why weren't they? Everyone's awake when the sun's in the sky! I angrily padded back to my room, and in doing so, passed the clock. I stared at it, trying with all my little brain to interpret the numbers. Only later did I learn that the clock had read 4:00 a.m.

I bounded back into my bedroom and pulled on my most vivid pink blouse, black leggings, and Cinderella sparkly glass slippers - my favorite outfit. Then I went into the living room and turned on the TV to "Barney." The big, purple dinosaur came on the telly and 30 minutes later, Mom woke up to a little voice singing, "I love you, you love me, we're a happy family" at the top of my lungs. What a way to start the day - with a spanking! I was sent to my room, and told to go back to sleep. How could I do that on my first day of preschool? Were my parents going totally senile? Did they really expect me to sleep? Unfortunately, that's just what I did. Pouting is very tiring.

I woke up again to the smell of doggy breath and the touch of a slimy tongue. "Yuck, Elsa!" I sniffed and smelled toast, so I knew it was safe to leave my room. I walked into the kitchen accompanied by the click-clack of my shoes. Mom turned around with the same words she said every morning, "How did you sleep, sweetie?"

She smiled, saying that it was too early. Then she noticed my glass slippers, and ordered me to take them off, which I did, though I grumbled. Breakfast was on the table, and Nick was waving his spoon from his high chair. I climbed into my chair only to see a bowl of gooey goop. Oh, no, I thought. "Oatmeal. Bleech!" Oops, I had said that aloud. I tried slipping out of my chair, but Mom had seen me.

"Come back here, young lady, and eat your breakfast," she commanded.

"Sit down and eat, or you're not going to school." Oh, she was good. That was the only bribe she could have used that day to make a stubborn kid eat poison.

Finally, after Mom force-fed me the disgusting, gray cement, we stepped out into the gray, oatmealy British day. A brisk wind toyed with my pigtails that stuck straight out. I was in a bad mood because I had spit toothpaste down the front of my pretty pink shirt and Mom made me change it. So far my day wasn't going well. How was I supposed to enjoy myself without my pink shirt and Cinderella shoes? I couldn't have fun in a Barbie shirt and pink Converse sneakers.

By the time we arrived at Buttons & Bows, it had started raining. The gray clouds joined the gray sidewalk, making it impossible to discriminate between concrete and vapor. My bad mood melted at the sight of my school. It was a small, red-brick building and the golden lights inside looked warm and inviting to me - a cold, wet little girl. As I opened the door, I heard laughter. A large, squishy lady with blond hair came up to us.

"Hello! Is this your first day?"

I nodded shyly. I wasn't going to talk to someone so big. She chuckled, and in her romantic British accent asked, "What's your name, luv?"

I mumbled a reply. Mom pushed me forward, and told her my name. Immediately, the lady, whom I learned was named Karen, burst out into the old Beatle's song "Michelle, My Belle." Not pausing for breath, she sang, "Follow me and we'll get you signed in and introduced."

She grabbed my hand in hers and steered me toward a group of kids, still crooning the old song. Seeing that I was leaving Mom, I yelled, "I'll see you after school, Mommy!"

She waved and replied, "See you later, sweetheart!" This was going to be a great day.

Later, after snack time and a quick nap, I was re-energized and ready to go. I made a beeline for the dress-up area. I chose a pretty pink dress (well, what did you expect?) and donned a blanket for my robe of silk and ermine. As I had seen queens do in movies, I walked slowly and stately the length of the play area with my nose up in the air. With my nostrils at this level, I could smell things that were otherwise undetectable, like the Play-Doh one kid was eating and the cinnamon cookies we'd had earlier. Suddenly, my cape stopped, and I fell backwards. When I looked behind me, I saw a curly carrot-top with freckles standing on my expensive, fur-lined robe. He gave me an annoying grin, and said, "You ain't a queen. You're ugly, an' queens are supposed to be pretty."

Infuriated, I grabbed my blanket and pulled it out from underneath him. He landed on his backside and started to cry. I felt a hand on my arm, and heard Karen saying, "That's it, young lady. You're going for a time out. That was horrid, hurting Teddy like that. Now, just you sit there and think about what you did."

And there I sat in the corner for 30 minutes. Not long after my bottom became numb, Teddy came up to me and said sheepishly, "I'm sorry. I didn't mean to be awful to you, getting you in trouble an' all. Can we be mates?"

Mates? What did that mean? Seeing my puzzled look, he smiled and said, "That means friends."

I was so taken aback by this offer that I looked at him as if he were not quite right in the head.

"Friends? You want to be my friend?" He shrugged and nodded. A gigantic grin spread across my face. My first British friend! Somehow, it didn't matter that he had gotten me in trouble half an hour before. He would become my best friend.

In the two years that followed, we did everything together. We were in T-ball together, we went to kindergarten together, and we even met up on holiday in Holland - by accident.

Looking back, I realize how hard it is to make friends, and that first impressions may not always be accurate. Teddy wasn't the horrible person I assumed he was at first. Now I'm determined never to judge someone without really getting to know them. 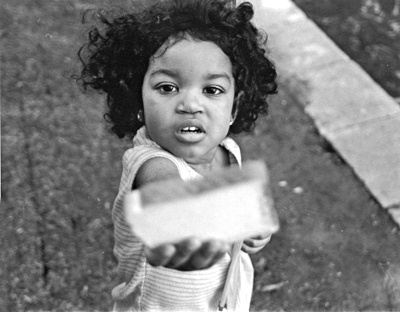