I tell you this because I have a memory teetering on the edge of my brain and I need to pluck it from its precarious resting spot and grind it into ink.

Eleven years ago, I witnessed an incident that would forever color my perception of the world. It began on a sunny kindergarten morning, when my teacher handed out sheets of white paper. They sat on our desks, their straight edges contrasting with the warped wood. Soon the teacher came around with brand new boxes of crayons. We imagined the smooth wax sticks inside the boxes, unbroken and fresh, with wrappers that had not yet been peeled. Anticipation dangled in the air and made us breathless.

As we sat there contemplating our tools, Mrs. Teacher cleared her throat and detailed our assignment: to create holiday snowmen. And so we began, brimming with the desire to please. The perforated lines on the crayon boxes were carefully opened, and the perfect sticks revealed. Three circles, decreasing in size, were drawn on top of each other. The stick arms were brown lines with branching ends; the coal eyes and mouth were composed of black circles. Each snowman had a carrot nose – an orange triangle. Some had square black top hats; some had sparse brown stick-hair. Others wore scarves (primarily red and green). Straight horizons were drawn, and the skies were colored blue.

My own snowman bore a green scarf and top hat. I was in the process of coloring the voluminous blue sky when my right hand began to cramp, and I sat back for a moment to rest.

The sound of raised voices made me turn. Over by the windows, a pink freckled boy sat in a beam of sunlight that illuminated and brightened his features. His face was turned upward, eyebrows knitted together and mouth squeezed into a pout. He seemed slightly embarrassed, betrayed by his blushing cheeks. Mrs. Teacher, on the other hand, was white with fury. She focused her rage at the boy, searing him with the harsh beam of her disappointment. Then the muscles around her mouth tightened, and she clapped her hands.

The class fell silent. Slowly Mrs. Teacher raised the boy's paper and displayed it to the class. There was a collective intake of breath.

His snowman was the shade of a ripe plum. There were four circles instead of three, and they increased instead of decreasing in size, causing the snowman to have a head much too large for his lower sections. The resulting creature was utterly unconventional and repulsive.

We all turned upon the boy, whose face was glowing with shame, his tiny frame trembling under the weight of our disapproving glares. Clearly he could see this rejection in our eyes, for he was practically vibrating with terror now. He sensed that his purple snowman had damaged our perception of him irreparably, and from that moment on he would be an outcast, a plague to be avoided lest it spread into an epidemic. He lowered his head dejectedly to his desk.

I went home that day with a sick twinge in my stomach, feeling as if I had participated in something even worse than the alienation of a classmate. 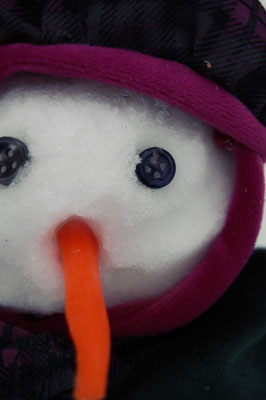 Favorite Quote:
Shaykul Islaam ibn Taymiyyah: It is sufficient to note that one of the effects of love of a member of the opposite gender is enslavement of the heart which is held captive to the loved one. So love is a door that leads to humiliation and servility. That is sufficient to put one off this sickness. [Majmoo' al Fataawa 10/132]

Favorite Quote:
Being in love with yourself first doesn't make you selfish,it makes you indestructible. :)

View profile
Wow! I loved the way you showcased society's way of alienation and ostracization through the mind and views of a child. You really portrayed the innocence and impartial view of a child witnessing someone being set apart, just for being different. So beautiful and definitely something for us all to think about! Nice job :)
LinkinPark12 PLATINUM said...
on Jan. 14 2013 at 2:59 pm
LinkinPark12 PLATINUM, Lincolnshire, Other
45 articles 1 photo 198 comments

View profile
This happens far to often in our society. one thing people don't recognize is that bullying has more forms than dogs have breeds.