All for you | Teen Ink

Favorite Quote:
That time when you feel like giving up... that's when you actually have to push yourself harder (:

Feeling apprehensive, Sarah, the assistant manager of 'Howard's Jewellery'
pulled the heavy mains switch shutting off all the overhead lights in the
store. The lights flickered and then cut off, plunging Sarah into darkness.
Hideous shadows created by the moonlight taunted Sarah as she walked through
the empty space. The sound of her expensive high-heeled shoes resounded off
the polished marble tiles that covered the exclusive shop. Insanely she felt
that she had to be quiet just because everything around her was so still and
silent.
Decreasing the pace of her steps, she suddenly realised that she was not
alone. She stood perfectly still sensing the footsteps of a follower. Every
step taken by the intruder behind her seemed laborious and angry, like an
intoxicated man trying to manage a staircase. Sarah's heart began to fight
against her rib cage: fear inside her upper torso was becoming
excruciatingly painful. She watched in the reflection of the numerous
display cabinets as a black figure rummaged in a ruthless and barbaric
manner, through draws and security boxes; ferociously discarding unwanted
jewellery onto the floor. Grunts would follow any empty boxes he found;
enraged by the increasing difficulty of his forage. To her horror she
noticed the silhouette of a black weapon on the bench beside him. Luckily
the hooded man was not aware of her presence, and savagely continued in his
dishonest hunt. Shattering the still silence, Sarah began to run towards the
glass panelled double doors of the store. Grasping the cold metallic
handles, Sarah abruptly stopped the moment she went to open the door.
* * *

Opening the door, Amy was overwhelmed by the sheer beauty of the
restaurant. Crystal chandeliers hung proudly from ornamental Victorian
ceiling roses, casting an atmospheric light across the wealthy diners;
lavish wall hangings adorned the walls in the highest quality fabrics;
well-dressed waiters glided across the intricately patterned floor serving
champagne in crystal flutes. Every woman she saw seemed to be in competition
with one another to wear the most decorative, colourful and long flowing
cocktail dresses. Every outfit shimmed, swayed and sambaed flamboyantly
across the restaurant floor, like actresses in an elaborate Broadway
musical: their talents rewarded with a desirous glance from a young
gentleman. Amy glanced down at her own attire and felt extremely
under-dressed.
A perfectly presented waiter with a neat bow tie and stark white
towel across his left arm led Amy and her boyfriend, James, to their table
by the window. The couple did not dare touch anything on the table as every
piece of cutlery had been laid with military precision almost awaiting its
next orders.
"Wow!", gasped Amy. "This is so much better than I thought; you
really didn't have to do this for me".
"Of course I had to. You're the most precious and special thing in
my life. I would do anything for you," came James' romantic reply.
Beaming with praise, Amy blushed, turning as red as her strapless top and
moved in closer, admiringly stroking her partner's forearm. Pulling away
from the intense moment, James remembered and began rummaging down beside
him, "I've got a small gift for you as well".
"Ah you really shouldn't have. How on earth can you afford an expensive meal
and a gift? Where have you been getting your money from?"
Not replying, he produced a box wrapped all in black with a silk, metallic
ribbon wrapped around both sides, converging as a large bow on top. The
doting boyfriend watched in slow motion as Amy began to carefully remove
layers of wrapping paper. His mind gradually began to wander from the
restaurant table to invoke horrific memories of that night at the jewellery
store. As he watched his partner's face glow with delight, the petrified
face of the shop assistant flashed across his mind. Amy's smile grew wider
and wider; yet all he could remember was the gap between his finger and the
trigger growing narrower and narrower. The small present opened as he
recollected the girl struggling to open the glass doors. Flattered, Amy was
lost for words, putting her hand to her chest in awe of the pendant's
exquisite beauty. James recaptured the image of the girl desperately
clutching her bleeding womb, lying helplessly on the cold marble tiles.
"James this is beautiful, I love you so much". The sound of Amy's voice
brought James back from his visions and into the restaurant. Leaning over
the table and grasping Amy's hands tightly, staring deep into her eyes,
James answered, "it's all for you". 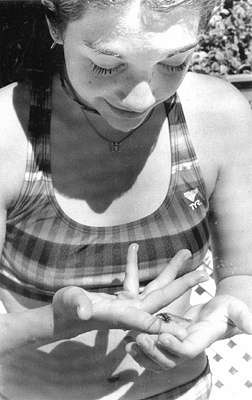 The author's comments:
It's funny what people will do just to express their love for someone, This is the short version of a story I wrote a long time ago....... i will be posting the full version soon, enjoy.
Post a comment
Submit your own

Favorite Quote:
"I love writing. I love the swirl and swing of words as they tangle with human emtions," James A. Michener.

View profile
Wow! It's thrilling and romantic at the same time. I usually hate things that are romantic, but this is really sweet and good. Keep writing!