Your Own | Teen Ink

One glance at my sour face, and she can’t resist, “It’s not like you have any friends anyway…” My sister laughs at the thought. Of course, she’s okay with moving- we’re moving for her.

“I don’t care about that, it’s everything about this town. Notice how I can say town, not city. Moving to New Orleans will be like moving to the sun. Not only is it hot, it’s humid. Not to mention about a thousand times the size. I prefer Southern Oregon, myself.” I turned back to my book. She won’t understand. Though we only had eight hundred kids in our school from kindergarten to twelfth grade, my sister knew all of them. Besides that, she had always planned on moving away for college. We were both so ecstatic, until I learned I had to go too. But I have a plan.

My mom disappeared when I was six. She was visiting her sister down in New Orleans and we never found out what happened. I need to know what happened to her.

At least I can figure out that mystery while I’m down there, but I still don’t see why we have to move at all. Can’t she just go live with our aunt to get in-state tuition for Louisiana? Apparently not, considering my dad already has an apartment waiting for us in the French Quarter of New Orleans.

Passengers please put your seats in the upright position and prepare for takeoff.

Ten years today. How could it be ten years already? I still miss her. The saying, ‘Time heals all wounds’ has got to be the worst lie around. This bar has practically become my home since that treacherous night of truths- the husband, our child, the lies. I still remember her warm blood turning cold in my unsure hands. I’ve gotten better at it.

Somehow, reenacting it helps the pain disappear. The shoulder length brown hair loses its shine; the warm chocolate eyes grow colder with hate. But it helps, it helps. Seeing her with as much bitter hate as I felt that night helps.

The clinking of ice in glasses is so familiar. 3-2-1, the loud voices turn into another drunken night of mistakes.

Day two in Hell. Yesterday I unpacked everything, desperate to find normalcy in the devil’s own city. This heat is bound to drive me mad. It has to everyone else who’s lived here.

However, I must face reality sometime. My sister says she’s taking me to the Mardi Gras fountain today. I’m only going because it was the last place my mother was seen alive.

I’ve found her again. She’s a little young, about sixteen, but this will just add to the thrill. It was her age the day I first saw her- at her sister Shannon’s wedding.

I went to the Mardi Gras fountain today, as usual. It was the place of our last date- the one where everything went wrong.

This one is practically identical to her. It caught me off guard. I thought I was hallucinating for a second. But now, I’m determined.

Tomorrow I will return to Café de la Ru for the first time in years. I overheard her saying she was going there. This one will be fun.

The newly restored Mardi Gras fountain was breathtaking, but something felt a little off. We had to leave quickly because of the afternoon storm, but I don’t think the electricity in the air came from that.


Everywhere I looked, I saw blue. A deep, electrifying blue. Two circles of blue to be exact. Two electric blue eyes. They were staring at me. Everywhere I turned, I saw them.

These weren’t carefree, ecstatic eyes. These were the possessed, demonic eyes of a hunter. Guess who was his prey?

The perfect, warm brown looks me in the eyes. It’s beckoning. Begging me to love it. I lean closer and the shade turns darker, darker, until it reaches the coal black of hatred, begging me to destroy it. Begging me to ruin everything. But I must prove my strength to her. I must do what is asked of me. I must go.

The heat is the worst. I was right about moving to the sun. Actually, I think that might be preferable. Not only is it nearing one hundred degrees, it’s also nearing one hundred percent humidity. That’s probably about 115 degrees in reality. Summer was not a good time to move.

Only two more blocks. Two more agonizing blocks walking to Café de la Ru with my sister. Then, with air conditioning and an iced coffee, I might be able to think again. I can barely breathe with this humidity bearing down on me, like a brick set on my chest. The café is in sight. You can’t imagine my excitement considering we lost ten minutes when we took a wrong turn on the way.

The cool metal of the table felt divine. I laid my head on it while my sister ordered, felling smells and sounds slowly work their way back into my nervous system. The place had quite a few people, but it wasn’t overcrowded. For this, I was grateful. Next I noticed the place smelled amazing. My mom wasn’t kidding when she said New Orleans coffee was her favorite smell in the world. She also said this was her favorite place. She came here every morning when she was down visiting her sister. She did that a lot…

Amy came back to the table with our drinks and sat down. Just then, the frozen blue eyes walked into the café. From this distance they appeared as sapphires. Glittering sapphires… he was crying.

He stumbled around as if in pain. He seemed to be remembering something. He wasn’t all there. The café had cleared out quite a bit, leaving only about two other tables filled. Finally, he went to the counter and ordered.

“Huh? Oh, sorry.” Should I tell her? “See that guy at the counter? I think he’s following me.”

“That’s crazy. We just got here two days ago.” Rational Jamie replied. The look on her face, however, was saying, ‘You really think so?’

I nodded and went back to watching the guy. He was at a table facing toward us. He met my curious eyes and I froze. The cold, daring sapphires bore into my skin and I couldn’t move.

“C’mon James, lets go,” Amy whispers. I can’t get up though. There’s something in his face- something besides the eyes. It’s… familiar. Scarily familiar.

“Jamie!” impatient now. Even Amy is anxious; this can’t be good.

“Okay,” I breathe, tearing my eyes away from him. Blood slowly trickles back into my limbs, and I am able to move again. With Amy nervously pulling at my arm, blue traces our every step out the door.

Café de la Ru went okay. I’ve had better. And worse. ‘Jamie’ is wary of me now. Just how I like it. I enjoy a challenge. She was just as feisty.

But this one, this one is so much alike…

“I’m sorry you had to move down here for me. So, to make it up to you, I’m taking you to a party tonight!” Amy was practically beaming as she tried to make her hair perfect.

“A party? Oh my gosh, that’s just what I wanted!” my sarcasm a little more than leaking through. She just rolled her eyes and turned back to her hair.

“There,” she said a few minutes later, “Now its you turn.”

A party in the French Quarter. The only people that could notice the missing brunette will be drunk. Her sister shall be occupied by Derek. I’ll steal her away. A little torture to see the hateful eyes and then it will be over. Just another Kaylie. Another lying, deceitful Kaylie.

“Can you grab my purse off your bed?” I ask Amy softly.

“Sure, why?” I kept a picture of mom when she was my age in my wallet.

“Here you go,” Amy returned with my purse. I quickly retrieved the photograph and looked at the back. It read:

Turning it over was like looking in a mirror. However, something was off. A chill ran down my spine when I realized what it was. The same sapphire eyes glittered in the background. Only they weren’t cold and evil. They were warm and filled with… love. Looking straight at my mother.

The party was loud and annoying. I didn’t too much care for it, so I sat in a corner by the back door. Amy had been with some guy the entire party, so I know I’d have to find my own way home. I was just about to leave when a hand came around my neck and covered my mouth. Well, screaming was useless. Another arm came around my waist and pulled me out the door.

I don’t know where we ended up, but it was dark. I could only see his sparkling eyes and a glint of metal shining in the moonlight. A knife.

The moonlight found its way over the roofs of the tall French houses and shown brighter. Not only could I make out this now too familiar figure, I could see him as if in broad daylight. But I wasn’t thinking about that. I was thinking about this exact scene ten years ago. Could I really be his daught-

“Turn around,” I said. “Turn around and look at me. Know who you’re killing.” Slowly he turned around. I got out the picture and held it up. “Does this look familiar?”

“Wh-… How-… where did-…” Confusion became recognition as his lips formed the words, “You are my daughter.”

In the bright moonlight the knife dropped to the ground with a clatter that rang into a dead silence. 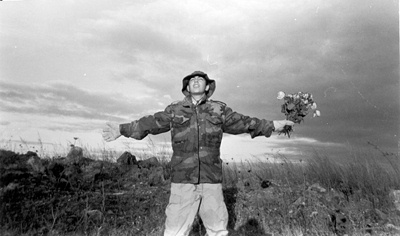 And since you know you cannot see so well as by reflection, I, your glass, will modestly discover to yourself, that of yourself, which you yet know not of.

View profile
The  ending is a bit too abrubt for my taste, but I like it :)