Ring! Ring! The bell on the door at the retro style, roller-skate dinner chimed, as the construction worker walker in. It was hot, sticky day out and as the afternoon sun was setting he was getting tired and thirsty. He ordered a cold drink of water that had condensation on it by the time he got it. He sipped his straw slowly as he swiveled around on his red bar stool to see what kinds of people littered the diner that day. As the sound of beeping and crunching of the trucks next door, he sensed that he was being watched.


He was in his 40’s, a middle aged man, didn’t think himself as an attractive man or a suspicious man but he sensed someone watching him and it made him un-easy. He rushed to finish his glass of water and return the power and control he contained at his construction sight. He left a few dollars on the table, grabbed his hardhat and left.


The waitress came by day dreaming about what she wished her life was like; married, kids, lots of money, working on her own time, and living in a huge house; but instead she was working full time in some run down retro style, roller skate diner. She was in her early 30’s and was rolling around on roller skates in a baby-blue-impostering-a-french-maid dress with a baby pink apron tied around her waist; not exactly what she expected at her stage in life. She wanted to be a big time chef at the head of a monopolized restaurant, but that dream would have to wait. She glided over and picked up the few dollars that were left on the counter, aimlessly putting them in her apron pocket. She was starting to skate away when she realized a big brown lump on the floor, opposite side of the counter to her. She was disgusted with the thought of what it could be so she went to go look at it and clean it up. When she reached the lump she was relieved to find that it was a well-loved, worn-out wallet.

She checked the ID as the restaurant policy says to and realized it was the Construction Worker that has been coming in here around three o’clock signaling for a glass of water, then abruptly leaving. He is a simple man, sitting in the same seat every day, looking as though he enjoyed his profession and power, not wanting to leave the position he has. He wasn’t exactly good looking but he did spike her interest, just a little, when he walked in. He’s a man’s man and she’s the typical working class girl. So she decided to take her afternoon break and walk over to see if she could catch him before he left.

She walked over happy that she finally got a break from those roller skates that practically seemed glue to her achy, swollen feet by the end of the day. Three years into the job with no raise, roller skates that are unbearable, and nothing happy to go home to. Point being, she trudged comfortably in her sparkling white nurse shoes, to the metal based construction site next door. As soon as she was close enough to the man pit the whistles and suggestive comments flared. Secretly liking the attention, she pushed down that feeling as she waltzed up to the closest man to her, looking at some blue prints. She bent over not really interested in his work but seeing as he hadn’t noticed her she thought it would be the best way to approach the situation. Hey what can I do there for ya little lady, was his introduction, so she began to tell him how she was looking for the construction worker the ID had shown.

The man said he’d show her to him and lead the way. The waitress followed skipping over scraps of metal here, tumbling on power tools there, doing her best to ignore the remarks shot at her every where. When arriving at the Construction worker who visited everyday at three o’clock for a glass of water she didn’t know what to say. So she did all she could do, held out her hand containing the well-loved, worn-out wallet. The construction worker chuckled grabbing it and stating something about how his old age and white salt & pepper hair is the main contributor to him being careless. That made the waitress giggle like a school girl, which provoked the construction work to introduce himself as, Bob Piker. She returned the favor, Cindy- May, holding out her hand. After what seemed to be a long talk they agreed to a date that Saturday night at 8:35 sharp, an unusual time but it was what best fit their schedule.

When Saturday rolled around both of their stomachs were swarmed with a terrible case of the butterflies, but both acted as if everything was okay which made their night enjoyable. Bob Piker, from Layback Colorado, showed up exactly on time while Cindy- May, scrambled to finish getting ready. Living with her girlfriend made dates like these easy to know if what she was wearing was appropriate or not. As she was about to leave her friend, Angelica Miles, gave her one more assuring nod out the door.

They went to a fancy restaurant, which wasn’t really fancy but to them with their standards it felt extravagant. There was a little band playing jazz music named Harrington Jayy, although it wasn’t their kind of music it got them in the mood the dance. Bob Piker, being the type of outgoing guy that he is he took her hand and twirled her ‘til they hit the dance floor. Cindy- May had taken every kind of dance course when she was younger that she made it look easy, twirling, gliding, jumping, the whole nine yards which made it easier for, Bob Piker, a man with no dance history but lots of rhythm to keep up and stay in stride. Just as the song was about to end he dipped her slowly smiling from ear to ear. Their eyes never left as it appear to their audience that they had been happily married for many years. He sealed the dance and the dip with a final kiss hoping that it wasn’t too soon. As they slipped back into their chairs their food had arrived and so had their appetite.

Halfway through their meal she started to feel a little nauseous. She was greatly enjoying her time with Bob Piker that she just pushed the feeling aside, but as she kept eating her meal the feeling became worse. She abruptly left the dinner table excusing herself to the bathroom. She never quite made it to the bathroom though so she diverted her route to outside the front of the restaurant and called Angelica Miles to come and pick her up.

Angelica Miles sped over the, 145 West East Street, where, Silver Moon’s restaurant stood. It was only a block or two away so it made it accessible for her to reach Cindy-May. When she arrived and saw the state that Cindy-May was in she was repulsed by what she had seen. With a face the sized of a hot air balloon and hearing the gurgling noise from Cindy-May’s stomach she knew the hospital was needed.

Back at the dinner table Bob Piker was anxiously waiting for Cindy-May’s return. He nervously checked his watch while sipping water, thinking that she had been gone quite a long time. It had been eighteen minutes and no sight of Cindy-May! Cindy-May had walked out on him, Bob Piker. He knew it! He knew he shouldn’t have kissed her! It was too soon! It was only their first date! He couldn’t have been more stupid. These torturing thoughts flooded his head made him embarrassed he needed to get out of the restaurant. Hurriedly he asked for and paid the check wrapping up their meals before leaving.

Once arriving there Angelica Miles leapt out of the car carrying her best friend and aggressively requesting a doctor now. Physicians rushed over and immediately jumped into trying to stabilize her. The quiet, dreadful waiting room became hectic with the medical team tending to innocent Cindy-May while Angelica Miles wept in the nearest chair. Later the night, or maybe early the next morning, Angelica couldn’t tell the difference, a doctor name Schwaartze came to deliver the bad news to Angelica Miles, Last night your friend got poisoned by Refidamine, a deadly drug, Fortunately she is still stable and living you can go see her if you want. She was horrified that someone could’ve done this to sweet, innocent Cindy-May and blamed, Bob Piker. After shortly visiting Cindy-May, Angelica Miles went on a man hunt for BOB PIKER.

She found him in his usual chair at three o’clock in the Cindy-May’s diner just as she anticipated. She marched through the door, Ring! Ring, went the bell on the retro style, roller skate diner, but that didn’t distract her from her mission. She used all that forwarded momentum to slap Bob Piker right across the right side of his face, which sent his water fling. She didn’t even wait to see what he had to say before she was screaming at him for poisoning her best friend. Bob Piker being extremely confused attempted to butt in but couldn’t release her from her rampage. Patiently waiting for her to slow down he tried to make sense of the jumble of words she was saying. When he finally got his chance he described how he wouldn’t want to hurt Cindy-May, (which Angelica Miles thought was a load of bull) and how it made sense that she didn’t return to the dinner table, and how he wanted to see her… Until he connected everything together! He knew what had happened! It all made sense now!

He explained to Angelica Miles how he knew someone had been watching him for the past couple of weeks and how they were probably trying to poison him and how she had requested to switch the meals at the dinner table because she envied his meal and how he was devasted that that had happened. 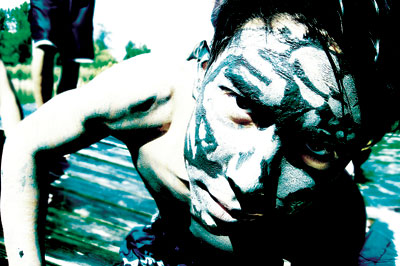