YOU LOOK THROUGH THE EYES OF SYDNEY, A GERBIL FROM ENGLAND, WHO HAS RUN AWAY FROM HER HOME AND NOW MUST SURVIVE IN THE WILD, WITH ALL PREDATORS TRYING TO END HER MISSION.

I was running. Running far away. From my home, my girl, my cage. Away from the only things I’d ever loved.

But it was necessary. I had to find him.

Through the crowded streets, I ran. My short, stubby legs spinning like the world was going to end. Suddenly, a big hand scooped me up and I was shoved roughly into a sack. My world was shaking, then everything went dark.

It had been so cold lately. My best friend, Madeline, (who was also my owner) had bought me a lot of Christmas presents: a new cage, complete with colorful lights, pink lace, and a tiny soft pink bed stuffed with feathers, just big enough for me to burrow into, a new food bowl, also with pink lace tied carefully around the rim and a new bottle with, you guessed it, yet more pink lace (ugh) tied around it and last, but definitely NOT least, a giant bag of my favourite Gerbil Bites: Gerbilicious.

The past days had been filled with excitement, music, food, lots and LOTS of food...

Anyway… the point is, I miss that food. I was allowed small bits of that food, but none of…The Sacred Muffin.

Madeline usually kept me on a strict diet, to ensure my weight didn’t go off the charts, but on Christmas, and my birthday, she made exceptions.

That’s why she’s my best friend.

But, yesterday, I smelt something I had never smelt before. The Sacred Muffin.

It was the centerpiece of the room. All the hustle and bustle, but my eyes were upon the muffin. It’s icy blue frosting glowed, like the eyes of a cat in the darkness. The silver balls elegantly perched evenly over the surface of the delicacy. And the wedge of white chocolate, oh, the chocolate, sparkling in the light of the chandeliers. It was a sight to behold.

Of course, the glorious treat was not to be, for it was whisked away before my very eyes, and given to a rather pudgy gentleman in a suit and hat, whom they all sang Happy Birthday to.

To be absolutely honest, I felt a piece of me die inside, shredded to pieces when I watched the man take his first bite.

As the man continued to torment me, I caught a whiff of The Sacred Muffin. Not the one being eaten in front of me, but another one.

I cautiously glanced in the direction of where the wonderful aroma was coming from, and I saw.. another Sacred Muffin!

A man in a cook’s uniform was wheeling the muffin away on a cart.

I tried desperately to get out of my cage, but it was no use. I got stuck in between the cage bars. Luckily, Madeline noticed my antics and opened my cage to free me. As she got me unstuck, I smelt The Sacred Muffin again. This time it was too much to resist. I scrambled out of my cage and sped toward the Sacred Muffin smell, which was in the kitchen.

As I ran, a servant boy opened the back door, and I sprinted out into the cool night after the Sacred Muffin.

I followed the scent down the streets, weaving left and right, until I had lost myself and couldn’t find the man, the muffin, or my home.

I decided to find somewhere to sleep and wait until sunrise to find my way home.

That night, I dreamt of The Sacred Muffin and what I would do if I ever found it.

I woke up the next morning, with a pack of hungry street dogs surrounding me, saliva dripping off their jowls.

I tried to back away, but they were closing in in a tight circle. One of the dogs opened up his forelegs, so there was a gap just small enough for me to fit through. As I ducked under the dogs, there were howls of anger. They all bounded after me as I tried to escape.

I was running. Running far away. From my home, my girl, my cage. Away from the only things I’d ever loved.

But it was necessary. I had to find him.

The man with The Sacred Muffin.

Through the crowded streets, I ran. My short, stubby legs spinning like the world was going to end. Suddenly, a big hand scooped me up and I was shoved roughly into a sack. My world started to shake, then everything went dark.

I woke up to someone petting my head softly.

I opened my eyes fully to see a boy, about Madeline’s age, smiling and putting some Gerbil Bites into a small plastic container.

A big man strode into the room.

“Have you finished with the rodent?”

Quite frankly, I was offended. I was a gerbil, not some dirty old street rodent.

I belonged to someone, and I missed her.

“Good. Now you may start getting the plane ready.”

It was only then that I noticed the big crates in the corner with AIRLINE GERBIL BITES in big bold letters stamped on the side of each one.

And my container was filled with my favourite Gerbil Bites!

I was now beginning to think that this day might not be so bad after all when Mr. Kableput suddenly pulled me out of my cage and into a crate... which was filled with other gerbils!
“You're gonna have great fun with my friends!” he said.

Now, that sounded suspicious. I wondered what he was talking about.

“Even though you obviously have no idea what I’m talking about, I’ll tell you anyway, little rodent.”

IT TURNED OUT THAT MR. KABLEPUT AND THE YOUNG BOY WERE PART OF A GERBIL SERIAL KILLER GROUP, WHO COLLECTED GERBILS AND SENT THEM AWAY TO PEOPLE IN THEIR GROUP IN FOREIGN COUNTRIES. SYDNEY NEVER SAW THE LIGHT, MADELINE, OR THE SACRED MUFFIN EVER AGAIN... 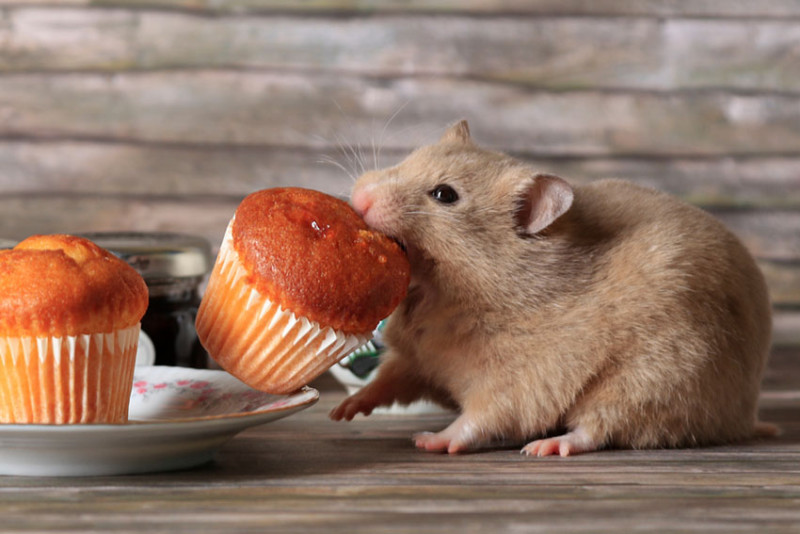 the picture is of a hamster with a muffin, but shush, i don't care at this point