Favorite Quote:
Run my dear,
From anything
That may not strengthen
Your precious budding wings

Charles wakes up heart pounding, panting hard. Lately he’d been having horrible dreams of being a cat. He didn’t even have a cat. Charles didn’t think much of his nightmares until his parents decided to get a cat to keep him company.

Charles’s parents got him a cat to keep him company? Hmmm... he supposed cats were amusing if not on the verge of annoying. But then his parents brought home Shadow.

Shadow had a beautiful coat of silver fur that shone luminescent in the dark. His eyes were a electric blue orbs that shone with a kind of fire. Sometimes when Charles looked into them, he could swear that they looked startlingly like human eyes.

A week later,
Charles’s fingers flew across the keyboard. Click, click, click. Hi Charles. The voice was deep and satisfyingly rich, like the purr of a baritone sax. Startled, he jumped up and looked around his room only to find Shadow leaping onto his bed. Telling himself it was probably a sleep-deprived hallucination or something of the like, Charles shook his head and resumed typing. Well, aren’t you going to talk to me? the voice intoned. Charles whipped around to find the cat on his pillow with its jaw open uttering sounds that sounded much to like English. Incredulous, Charles gaped and gawked and then gaped some more. “I… I..didn’t know cats could talk,”  Charles stammered. Shadow yowled in much too accurate cat-sounding English. Of course cats can talk. What did you think we did? Meow? Growl? Purr? Of course you did.

“Well, yeah” was all that Charles choke out before he exited the premises to go to the bathroom to splash some water on his face. This couldn’t be. His cat did not just talk to him. No, no, definitely not.

Exactly 10 hours and 32 minutes later…
Charles was a cat. His cat was Charles. He was looking at Shadow giving him a bath. He struggled and protested. He scratched and bit. But nothing could stop the onslaught of watery froth. Something furry tugged at his shirt. His shirt? Charles groaned and his eyes flew open. Much to his relief, Charles was still very much boy with no furry features. His feline friend however was sitting calmly on his chest. Charles’s face was covered in cat saliva. What a bath! “Come on, come one, it’s time to get up,” urged the outspoken felus catus. Charles shook his head. No, no, no, not this again. Cats most definitely did not talk, they only purred, yowled, and occasionally hissed. “What’s wrong?” asked Shadow.
“You’re meowing in English again,” said Charles.
“Really? I didn’t know,” Shadow responded nonchalantly. “Come on already, I’m starving. I was thinking about maybe a couple strips of dried salmon jerky with a cozy bowl of milk. Or  maybe some of that really good tuna on that really high shelf (now that is one fish I cannot fathom how to reach).” Charles shook his head, this cat had an appetite, a gourmet one too at that. “What,” said Shadow, “Let’s go! Chop chop! The day won’t wait for your laziness and neither will I!”  pronounced the feline. With that, the cat dug his claws into the boy’s chest, trampolined off Charles’s chest and sauntered down the hallway. The boy shook his head and ran after him. Sometimes he could swear that Shadow had the appetite of a growing boy.

Some months later…
Charles had grown quite fond of Shadow. They laughed, joked, and about the absurdities of cat and human alike. Charles mocked Shadow’s odd habit of stalking just about any slightly plump animal within fifty meters of their house. Shadow couldn’t understand why humans (and sometimes cats) needed baths. Wouldn’t a good lick just do the trick? Who needs all those bubbles and scrubs, especially in watery depths? At least in creamy milk or something? Humans pfft.

A chilly November night...
Shadow had mysteriously told Charles to meet him in the park at 6:17 pm sharp. Charles wondering what was up showed up a minute early at 6:16. A minute later he found Shadow staring into a large puddle of water. Charles plopped down next to Shadow and gasped. In Shadow’s reflection in the water, a boy stared back. Charles befuzzled, looked from cat to boy and back from boy to cat. “Whoaah, let’s back it up a couple steps,” said Charlie, “Shadow, what’s going on?” Shadow bared his teeth in a humorous attempt to cat-smile and leaped into Charles’ lap and whispered in his ear. The cat then jumped into the puddle and with a flick of his tail was gone into the night.

He had whispered something Charles could not even begin to fathom. Something so shady it was worthy of the cat’s name. If we could switch lives, would you do it?

7:03 pm...
Shooting stars fell like rain from the heavens, setting ablaze the darkness of night.  The trees rustled their leaves ominously, the grass bent their heads obediently. When the light had faded Charles looked at his cat. His cat looked at him. He looked up. Shadow looked down. He had paws. Shadow had hands. He had a nice tail. Shadow didn’t have a nice tail. “You’ll get used to it,” a voice floated down to Charles. Charles looked up, mildly alarmed that he was now trapped in a cat’s body. “Took me awhile to adjust but once I did, I regreted it.” Charles couldn’t believe his ears, who was Shadow? “You were so gullible, let yourself be swindled so easily. At last, I am a boy again.”

Charles shook himself hard. Maybe a dream? Bit himself with his new fangs and only suceeded to pull off a few tufts of tawny fur. He would do anything to convince himself this wasn’t true. But it was. He shrugged and thought about what fun he would have with the house to himself with Shadow at school and his parents at work. He would play all day at the park. And the day after tomorrow and the day after that.

That night, Charles slept in his new kitty bed he had made for Shadow out of old T-shirts, soft and faded after many years. He had tried to clamber into bed with Shadow only to be pushed off and neglected like the annoying creature he had become. Charles had always pushed Shadow off the bed before. What could he do? Tell his parents? Who would believe a talking cat that claimed not only to be a boy but their own Charles? He already knew the answer.

One month later…
A boy and his cat were at the park. Or so it seemed. They nodded to each other. The boy told the cat something. The cat replied, or so it seemed if cats could talk. A flash as bright and fiery as the noonday sun filled the park, a whoosh whipped across the park that made the flowers bow their crowns of petals. When the light faded, a boy stood where the cat had sat and a cat sat where the boy had stood. The cat seemed ruffled and shook itself as if to shake off its furry coat. The boy grinned, and thought at last. 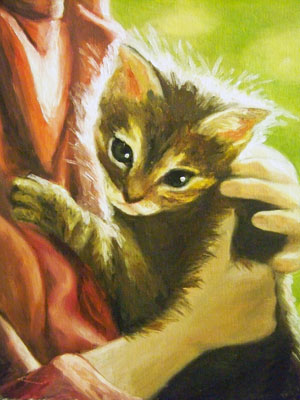