The last time it rained it was the day before I betrayed my family. The day before Ma died. The day before Pa withered away and forgot about us kids. Before Kaya lost her voice and Kaga made it his mission to get himself killed.

It was day before I started to hate myself.

Ma had Kaya, Kaga, and me out carrying all the cooking pottery outside to sit them on boulders and wedged into holes we dug in the sand with our hands. A pot had slipped from my hand and shattered at my feet. Weeks of gathering the clay from under river rocks wasted on my careless fingers.

“Echa,” Ma has scolded in her melodically voice that sounded nothing like Pa’s, “Where’s your head at?”

It was in a place far away from Red Canyon with its suffocating walls of rock. It was with the bag of my clothes hidden underneath the stones on the east side of the house. It was working out the steps I would take to carry me out of there as soon as night cloaked the canyon. Oh, I thought myself so clever for being so secretively cunning.

It was not, however, with the job of setting out pots to catch water from Ma’s foreseen rain storm. “How do you know it’s going to rain when the sky hasn’t spitted a single drop in months?” I was frustrated by my carelessness and didn’t like the disappointed frown that marked her brow.

“It’s in the clouds, child.” she had said, not looking at me. Her eyes on the red rock wall of the canyon. Her fingers clutching around the bone necklace she always wore around her neck.

Ma was from somewhere far away from the canyon. That’s why she talked just so. Often asked her where, but she would shake her head with her fingers looping the finger bone on its leather strap. I wonder where she was for it to be okay to wear someone’s finger around your neck.

She was a wispy woman who wore wraps the color of the desert flowers. Purple, yellow, and greens. Her hair was dark and rippled down her backside in a tangle of curls. Pa says I look like her. He even calls me by her name now when he’s drunk and red faced. I know he’s lying or just imagining when he says it. I could never be as beautiful as Ma.

I looked up at the sky with its vastness that stretched above me. No clouds. I didn’t question her farther though.

She had a way of knowing things before they happened. The day before I slashed my arm on some wire while me and Pa was building the well, I found her making a bandage out of Kaga’s old baby clothes. Before the desert flowers bloomed down in the ravine, she would send me out to gather bramble weeds to weave into baskets. She never told me how she knew, she just did. I should have known that she already knew I was going to run away.

We both turned to watch Kaga, overly brave for his seven year old self, jumping from red rock to boulder like one of the jumping spiders I sometimes see when a drought creeps into the canyon. I frowned at him, waiting for him to fall. “Knock it off, Kaga. You’re going to break your leg.”

I went to him and pulled him up by his underarms. Roughly and unsympathetic to the tears running down his sunburnt cheeks or the way he held his arm. “See, look what you did! You should mind me when I tell you something.”

“Echa! You’re hurting me!” He had squealed in his ginormous voice. Echoed through the canyon. “Put me down!”

I shook him. Flopping him like a dead fish. I don’t know what I was thinking. I guess I wasn’t. Or maybe I was still mad over the pot. “Will you mind me next time? Will you?”

“Yes! Yes! Now, put me down!” Kaga screeched. I dropped him to his toes. He balled his fist and slammed into my stomach. It yanked the frustration right out of me. I looked down at his crying figure with his twisted arm. Finally seeing how out right cruel I was being. I reached for him.

“Don’t touch me!” Holding his arm, he ran to Kaya who stood a few feet away. Smothered his sand covered face into her skirt.

“Oh, Kaga,” she cooed, stroking back his fire hair. She then looked up at me with anger in her eyes. Kaya was so gentle and sweet, never rising her voice. Of course I would be the one to bring it out of her. “Why do you have to be so mean, Echa?”

Kaya took Kaga’s hand and I watched them walking the path back towards the house where Kaya would give Kaga a spoon full of vanilla and do something to make them laugh until they both forgot what a horrible middle sister they had.
I was horrible even before I caused Ma to die.

She stepped up beside me with her purple wrap fluttering in the breeze. She continued twisting the finger bone between her fingers. Her face unreadable. She normally left our disputes to ourselves because we wouldn’t learn nothing if she stepped in and stopped them. I thought she would say something about the rain storm or maybe even tell me that I would have to make a new pot to replace the broken one, but she didn’t.

“Echa, dear child,” she began in her tinkling voice that sounded as old as the canyon but as young as the wind, “you are the strong one. You’ll have to take care of the others who are meek and helpless. They’ll look to you to save them all. Don’t be selfish, my prideful daughter.”

I tried asking her what she meant, but she had slipped back into staring at the canyon’s blood colored walls. Her fingers going white around her necklace. She often did that. As if for a couple of moments her mind slipped away to the place she came from.

That night it had poured the rain. The water attacked Red Canyon. Puddled in the crevices of the rock. Rutted out small streams in the pebbled ground. The clouds blotted out the stars. The Moon. The night. Covering the canyon with its darkness. It made it hard to see and move my feet as I trudged through it. Soaked to the bone. Unable to see for the rain pelting my face.

I don’t know how far away from the house had I gotten when I heard the screaming. It pierced the night. Louder than the rain and somehow I knew. I knew what I caused. Knew that Ma had followed me into the storm, set on changing my mind.

I turned around and ran back to where I came. Ran across the slick ground. Ran over ruts and rocks and stone. Ran until I came across the rock slide. Apart of the canyon had fallen in, filling the section of the valley. And amongst the rumble a hand was visible in the rain. Long, wispy fingers that could only belong to a very wispy woman.

That was the beginning of the end. 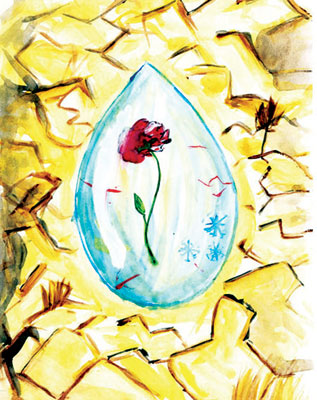 The author's comments:
I was looking at pictures of a desert in Jordan called Wadi Rum and the piece just kind of happened. (Wadi Rum is beautiful. Check out.)
Post a comment
Submit your own