Favorite Quote:
"Paper is more patient that man." -Anne Frank
"Always do what you are afraid to do." -Emerson

Superheroes are real. I know, because I am one. I know what you're thinking right now. You're probably thinking that I'm a crazy teenager whose ability to think clearly is jacked up by my hormones. And I bet as soon as I even mentioned the word superhero, a picture of Batman in all his heroic glory popped into your head. I don't blame you. It's only natural, really. Because by the time we're in our teens, most of us Americans will have read the comics, seen the movie, or somehow become culturally aware that some genius invented seemingly ordinary human beings who actually have supernatural abilities like the ability to fly or super-strength.

But let me just get this straight: Comic books are a cover-up to hide the fact that superheroes really do exist. It's all Superman's fault. I've met him, and trust me, he's not the brightest. Putting it kindly, he's a moron. When he foolishly exposed his "Clark Kent by day, Superman by night" identity, someone realized that something had to be done to keep the rest of us superheroes safe from the paparazzi and the media. 'Cause let me just say, when you're trying to balance trying to write a book report on a book you didn't have time to read with saving the world, you don't have time to tell the Channel 8 News Crew what your childhood was like. (Honestly, my childhood was about the same as any other's, excluding, of course, the frequent meetings with my "Supernatural Ability Mentor". By the way, that's just a fancy name for an instructor that teaches you the basic principles of flying.)

Don't get me wrong, I still have to go to public school. Really, in my opinion, junior high is the hardest challenge life could ever throw at someone. Between impossible teachers and social cliques, I honestly believe it's harder for me than it is for my classmates. I mean, think about it. If you were being bullied by someone twice your size and you had the power of super strength, wouldn't it be impossibly tempting to put a dent in their inflated head? That's the story of my life. In the same way preschoolers learn the alphabet as the base of English, we learn that you are never allowed to use your powers for anything other than world-saving or life-saving purposes. Needless to say, some have (putting it lightly) "abused" their skills for personal, selfish uses. You probably know of some of those people, like "He Who Shall Not Be Named". (Yes- Voldemort.) I don't mean to point any fingers, (ahem, Hitler) because in reality there is not one superhero or HIT (Hero-In-Training) that hasn't dreamed of showing up all the jerks that push them around.

'Cause honestly, we're human, too. We're just special. You'd be surprised to learn some of the people that are heroes. Most special-ed kids are. I am. Just put that in perspective. Maybe next time you see that shy quiet girl with a limp from your math class, you'll see her differently, because guess what? She's a superhero, too.

You can't tell anyone I said this, because I'm not supposed to even acknowledge the existence of my kind outside our "society." The only reason I said it was because I was tired of the loneliness. Sick of the isolation. Do you have any clue how difficult it is to have the coolest talents in the world and not be able to show them off? No. You couldn't possibly know. No one knows. I'm alone in this world that I'm supposed to save... 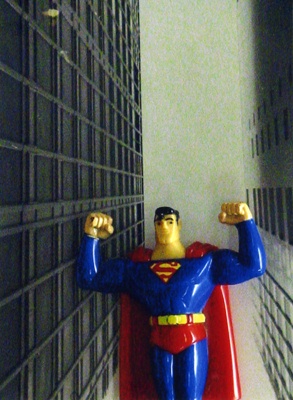 The author's comments:
Everyone has a hero in them, so take the time to see it in others before you knock them down.
Post a comment
Submit your own