The wind rushed by as the car sped down the road. Light snow fell from the gray of sky that stretched millions of miles over the horizon. They drove in silence, occasionally looking back at the boy who slept peacefully in the back seat. He was dressed in red robes, his crown by his side, mouth half open. She looked at him from the passenger seat and sighed. Turning to the driver, who kept his eyes on the dark turning lane, she touched his free hand and squeezed. The driver looked at her with worrying eyes.
“ We should turn back.” Leslie answered.
The expression on Tom’s face stayed unreadable. “ We’re hundreds of miles away from the palace. It’s too late to go back now.” he replied.
“ But I can’t bear this!” Leslie spoke in a louder tone. Tom raised his hand and looked back for a quick second. In that second, the boy had not woken “ You don’t want to startle him, do you?”
“ I don’t want to do this at all.” Leslie pleaded.
“ Leslie, you agreed to this. There’s no turning back.” Tom said.
Leslie looked down towards the floor. Her hands laid in her lap as her yellow curly locks fell to her face. Tom looked over to her and sighed again. “ I know it’s hard to do, but we agreed to it. We can’t let the others down.”
Leslie raised her head.
“ But what about him?” she began, “ Is it okay to let him down?”
She cocked her head to the back where the boy rested. Tom did not answer her, though he knew what to say. Leslie grabbed onto Tom’s arm and shook him hard. “ Don’t you see? This is all wrong. We have to take him back. If they find us, do you know what they’ll do to us? To our families? Our entire race will,”
“ I know the consequences of our actions, Leslie.” Tom replied sternly as he brushed off Leslie’s hold. “ But there’s no use dwelling on that. We need to stay focused.”
“ How can we stay focused when they can track us-” Leslie started. “Enough!” Tom shouted. The boy groaned in the back as the two whipped their heads at the sound of his voice. After the groan, the boy yawned and returned to his slumber. The two shifted at the front. Tom’s eyes were once again on the road.
Leslie sat back in her seat and looked at the boy. “ But I have to face them all tomorrow. How will I be able to-”
“It’ll be fine”. Tom answered softly. “ Just do what we talked about. They’ll never know;” There was a slight pause before Tom finished his sentence. “unless you look guilty.” he smiled lightly.
Leslie did not return the expression. Instead, she turned to the window and looked out at the snowy mountainous area they were approaching. A silent tear fell from her eye as she processed what would happen to everyone she knew if the plan did not go well. They had worked so hard in fulfilling this act and one wrong move would deal her and the others in. Leslie pondered the torture they would endure. She had heard many dark tales of criminals feeling immense pain before death for committing a crime against the powerful. Their abilities were limitless when it came to that. Leslie shuddered at the thought of the suffering. For the rest of the ride, there was nothing but quiet. The freezing air outside the car was not the only thing bitter and cold in the silent night. 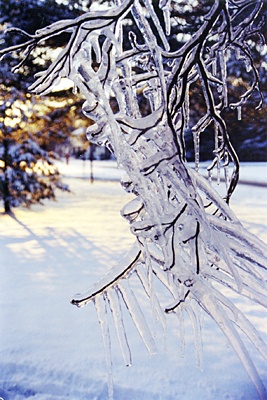 The author's comments:
If any of you have seen the anime Trinity Blood, I was inspired by that. There is also elements of X-men in it too. Tee-hee!
I have another series called A Stranger in My House, but since I did not get enough feedback on it, I may have to discontinue the story. If you wish me to stop that paticualr series, please comment. Remember to read that story first before you do say something.
Please and Thank You! :)
More to come on this series.
Please comment!
Post a comment
Submit your own