I thought I would never be able to tell them apart. They all look the same. No distinct qualities, nothing to help me separate one from the other. The only way I can do that is through personality. But to find that out, I’d have to let myself get close to them. And after that, it’s already too late. It doesn’t matter what category they fall into. I’m already theirs.

Some of them I can tell right off the bat. If they were looking at me, then that was good. But if their eyes rested nine inches lower then where my eyes were, then that was bad. I don’t give them my attention again after that. They’ve lost their chance.

Others aren’t as simple. Like him. He was so perfect, so sweet. He looked right into my eyes when we spoke, never once daring to let them run astray. Those eyes, those perfect brown eyes. The ones that had to look up to see mine, but when I fell under their spell it felt like they towered over me. The eyes that could see right through me, reading my expressions, knowing my story before I’d even had a chance to begin speaking it aloud.

I loved it when he hugged me. It was amazing to be in his arms. I felt protected. This scrawny, tiny person could protect me, oh how silly that seems. But still, he didn’t feel so small when he hugged me…it was like…I can’t even explain it. Like I didn’t have to worry anymore. That all my silly fears were just that, silly.

He made me feel so at ease. I think that’s why I didn’t notice anything out of the ordinary that night. I just wasn’t looking for it. I had let my guard down with him long ago.

I first noticed it when he let me fall onto the couch. He never would have let me fall in the past, what was so different? I was always tripping over his feet, but he was always there to catch me. And this time I was even being careful. But this time it was like he wanted me to trip, falling on my back.

“Derek…no, Derek, what are you doing?” I asked, alarmed when he jumped on top of me. He didn’t answer; he grabbed my arms and pinned them to my sides. His knees were directly on top of my legs, not letting me move at all.

He was still looking into my eyes. But not with the same gentle compassion as before. Now, he had a menacing glare, one that screamed the hunger, the need to have me so vulnerable, while he is superior over me.

I loved him. I loved this creature, on top of me, holding me down. I didn’t care that he was hurting me; all I cared about was him. He leaned down, his mouth forcing itself on my already parted lips, the impact of which made my eyes close, giving myself into the kiss.

He let go of my arms, as he knew that I wouldn’t be moving anytime soon. His poisoned lips, the tainted love of which he had for me paralyzed my body, leaving me motionless. His now free hands cupped around my face, picking my head up slightly, taking complete control. I let him, as I knew I wouldn’t be able to keep up if I tried.

When he pulled away, I found myself craving more. I repressed the feeling, knowing that if I succumbed to it now I wouldn’t be able to change my mind. At this time, I still held onto the hope that he would let me go if I showed the slightest sign of distress.

I didn’t do well at hiding the look of need in my eyes. I knew that with a bit more experience I would have been able to hide that need, but I had never been in this situation before. I wouldn’t know how to take control even if I wanted it.

He saw the need. He took advantage of that need. Putting his lips to mine yet again, parting them easily, and taking control. And I let him. I had no other choice. He was slowly taking over me, becoming totally in charge of my every thought, my every move. The last thought I had for myself was that I loved him. After that, I drifted, completely under his spell. 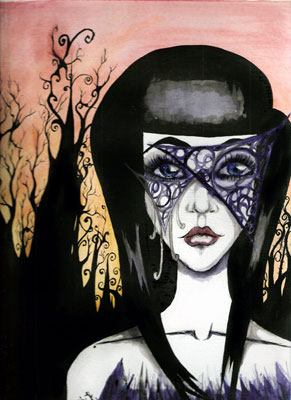 Favorite Quote:
" You must live in the present, launch yourself on every wave, find your eternity in each moment." By Henery David Thoreau

View profile
Dude that is REALLY good!!!!!! I like it alot!!! You should put more of those on there!!!